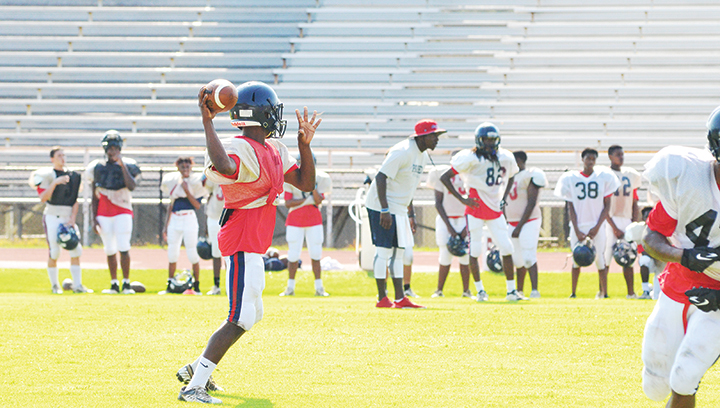 Photo by Anthony McDougle/
Ole Brook sophomore quarterback Sevante Quinn prepares to make a throw during the Panthers’ first scrimmage of the fall.

Football season is on the horizon in Mississippi.

Here are a few early takeaways and observations about area teams.

Panthers head coach Tommy Clopton said his team was not quite where they wanted to be, but added that there were plenty of bright spots during the team’s first scrimmage of the fall.
He said the most important thing was that his team came out of the day healthy.

“Our defensive line play was good. Jefferey Johnson (nose tackle) had a good day,” the head coach said.
“Kenneth Dixon ran the ball well and our offensive line did well at times.”

Clopton added that he would be working on his team to fine tune the simple things that are necessary to get their job done.

“There was more good than there was bad,” Clopton said. “They are going to get there we just have to keep working day by day.”

Around 59 players took the field for the Cougars’ scrimmage on Saturday.  Head coach Jaymie Palmer spoke highly of his team’s depth at  the skill positions. He also said his team needed to be more physical at the line of scrimmage.

“The effort and the enthusiasm has been good,” he said. “This is one of the best groups of receivers I have had as a whole.”
“We have the pieces of the puzzle,” Coach Palmer said, “we just have to put it together.”

One scrimmage may not be enough to make an informed decision about the Cobras but they could well be better than a lot of people assume. They have considerable talent at the skill positions and could surprise a lot of people.

“Everything is new to the guys this year,” Loy said. “We have a new offense and new defense so they have a lot to learn around here.”

Wesson will travel to Lawrence County Friday for a jamboree to face the Cougars and Loyd Star.

It is no national secret that Lawrence County likes to run the ball. It is what makes their offense go.... read more