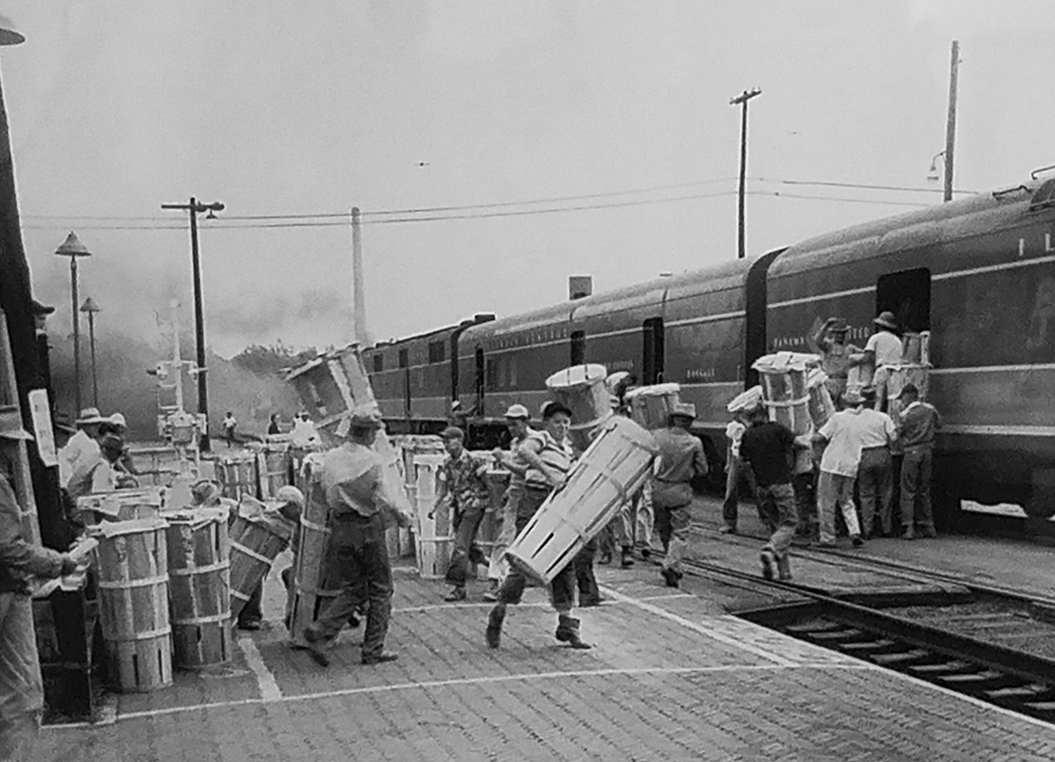 Photo submitted/Workers load gladiolas s onto the Panama Limited for shipment to wholesale florists in Chicago in the late 1940s. About 10 growers, including Frank Burns, sometimes had over 300 hampers that had to be loaded onto the train in less than five minutes. The white squares on the platform designated which flowers went to which of the various stops. The closest cities’ shipments were loaded last.

The sign leading into Frank Burns’ homestead, where millions of gladiolas have bloomed, says it all.

“Thanks for 70 years! Closed, but still awesome!”

While the green and white message captures the sentiment by many about Burns’ long-deserved retirement, they’d need a mile-long strip of highway and a dozen or so billboards to adequately recap his career.

As owner of Brookhaven Nurseries for most of his 92 years, Burns provided landscaping, trees, plants, bedding plants and flowers to Brookhaven, Lincoln County and florists nationwide.

He was born Franklin Theodore Burns in 1923 in Hogchain, named after his two grandfathers. 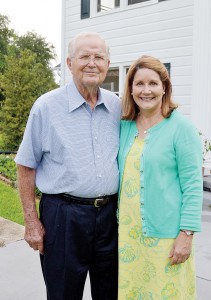 At Brookhaven High School, he was active in sports, playing football under the legendary coach John King, after whom King Field is named. He ran track. Boxing gave him a broken nose, which made his mother a bit faint when she saw him all bandaged up after the match.

Even in high school, he had a head for numbers.

“I was a good student, excelling in chemistry and math — a flop in English,” he said.

He was a tinkerer, always fixing things and building things. He loved turning his ideas into inventions.

The airplanes would play an important part in his life after BHS, when he served as a Navy pilot during World War II aboard the U.S.S. Shelikof.

“Some of my proudest times came when I was in the military,” he said.

While in high school, he enjoyed fishing and hunting.

“I sold watermelons at the roadside my father had grown to buy my first .22 rifle from Sears Roebuck,” he said.

It cost him $8 and was one of the first in his collection of guns, most of which include muzzle-loaders. He gave that collection to his son, Ted Burns.

He grew up fishing on the Bogue Chitto River, catching catfish, bass, bluegill and a lot of eels.

His dad built a small camp on a lot in Biloxi and he’d cast out in the Mississippi Sound for speckled trout, then cook those specks for dinner.

When it came time for college, he headed to the University of Texas at Austin, after reading about it in one of his father’s magazines. He majored in mechanical engineering with a minor in math.

Then came the war.

To avoid being drafted into the Army, he enlisted in Naval aviation. He was sent to training school at Ball State University in Indiana, where he met his future wife, Kay, at a college hangout called The Tally Ho.

Discharged after the war in 1946, he never made it back to college.

The 10-acre plot of gladiolas his parents grew before he left for the war had developed into a business with 40 employees. But his father had health issues and couldn’t carry it on.

Burns wanted to marry his sweetheart, so he agreed to become partners with his father.

“That’s how I became part of Brookhaven Nurseries,” he said.

Kay Burns took a job as a first-grade teacher for the Brookhaven School District and that’s what she did for the next 30 years.

“I once heard her say, ‘I would almost pay the school to let me teach,’ he said. “On more than one occasion, when we were out together, a total stranger would walk up to my wife and give her a hug. He would then explain, ‘She taught me in first grade.’”

Times were tough and they relied on her salary for several years, he said.

Even though he had to oversee 50 acres of glads, he still found time for hobbies.

“I had a keen interest in astronomy,” he said.

He built an 8-inch lens diameter telescope during his wife’s pregnancy with their second child, a daughter they’d name Jill.

He and some other growers formed an organization they named “Mississippi Gladiolas Society,” to have a more powerful voice in the industry. Burns was president.

“We pooled our orders for supplies whereby we could negotiate better prices,” he said.

Transportation of their product was a big problem. They met with representatives of the Illinois Central Railroad, which ran from Brookhaven to Chicago. The trains that ran the line could reach Chicago in 15 hours, which was ideal for shipping glads.

Twice a day, the workers from local nurseries gathered at the train station in Brookhaven, ready to toss hampers filled with cut  gladiolas into the open door of the train, which would deliver the flowers to stops along the route to Chicago.

Each hamper held 20 dozen stems of gladiolas. Sometimes they’d have 300 hampers to get on the train in five minutes. Burns negotiated that time up from three minutes.

“Sightseers gathered at the station at train time just to watch,” he said. “The process was highly organized with each grower having his spot in the loading process. The loading area was marked off by cities, with each city located where it could be unloaded at the right time.”

When Illinois Central cut out the Railway Express, the local growers took a big hit, he said.

Brookhaven Nurseries had already started a venture into wholesale greenhouse production and a shrubbery sales yard, which continued until two months ago when Burns let his last employee go.

At the height of his career, he owned about 30 greenhouses behind the house he built just off Hwy. 51.

Burns’ son, his junior, lives in Birmingham and runs his own business, Ample Energy, which does oil and gas exploration over the eastern U.S.

Daughter Jill Logan followed in her mother’s footsteps and became an educator. She is an administrator at Copiah-Lincoln Community College.

Burns stays active, entertaining friends at his home on Friday nights. “They have a meal together, unless someone invites him out first,” Logan said. “He’s a pretty popular guy.”

He regularly attends Sunday school and services at First Baptist Church Brookhaven. He’s a deacon there, too.

He rarely misses a meeting of the Brookhaven Exchange Club, which he joined in 1948.

At the workshop behind his home, his tinkering has benefitted the Exchange Club Fair.

He built the Chunk and Dunk dunking booth, a milk bottle throw, the concession stand and the railroad and train the circles the whole fairgrounds, he said. He also built a giant cooker that could boil 40 pounds of peanuts at a time. The club still uses it.

Burns lost the love of his life in May. Together they shared four grandchildren and seven great-grandchildren, including two sets of twins born 23 days apart.

You Asked: Slow down at railroad crossings to prevent wrecks

Q: Why don’t some of the railroad crossings in Brookhaven have warning lights to let you know a train is coming?... read more