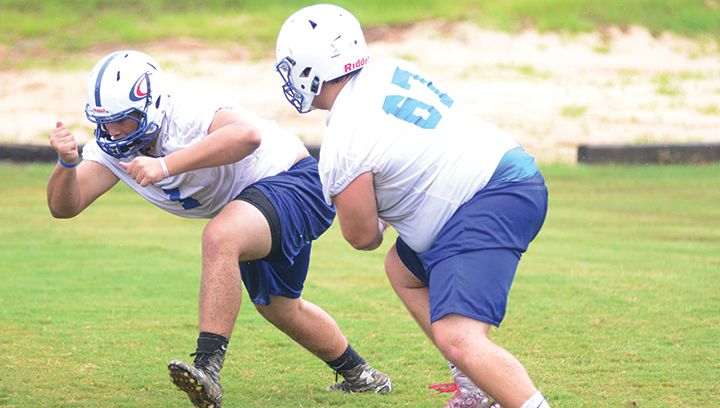 Photos by Anthony McDougle/
Braxton Hayles (No. 67, left) will be expected to play major a role on offense and defense for Copiah Academy in the 2016 season. 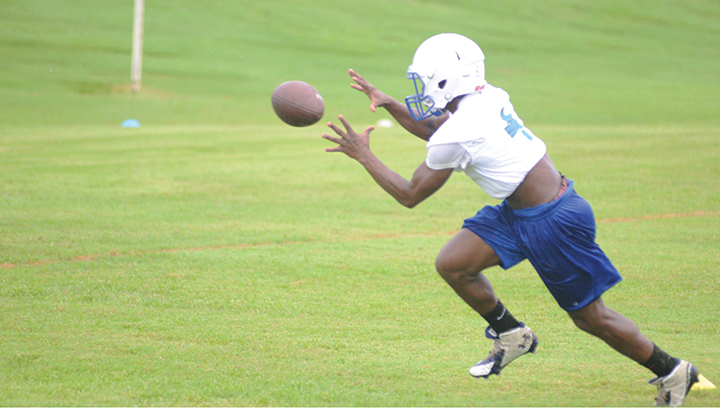 Photos by Anthony McDougle
Miquell Powell will also be expected to play major roles on offense and defense for Copiah Academy in the 2016 season.

Every team needs one sure-fire player  they can depend on to make contributions on each side of the ball. A player they can look to when a big play is needed.

Some teams are lucky enough to be able to look to that same player on both offense and defense.
The Copiah Academy Colonels  have two players, Miquell Powell and Braxton Hayles, who have proven they can be that type of player for their team.

Last season, Powell was an absolute ballhawk for the Colonels.
Playing the free safety position, he led the defense with eight interceptions and also proved to be a sure tackler in open space.

He also did damage on the offensive side of the ball and on special teams.
Powell returned four touchdowns on speical teams and  scored 10 touchdowns at wide receiver as a primary target for Copiah.

The senior said his most memorable play came against Hillcrest.

“We were on the 40-yard line and coach called a wheel route and I know that play usually goes to me,” he said. “I broke through the inside and beat the safety and corner and timed my jump right to beat them to the ball. After that I was off to the races.”

“With the ball in his hands great things happen,” Anderson said. “He is a great route runner and will catch it anywhere you throw it.”

When asked which position was his favorite, Powell surprisingly  said he preferred receiver to free safety.

Like Powell, Hayles was a force for the Colonels on offense and defense last year as well.  The senior lineman tallied eight sacks and averaged closed to five solo tackles per game.
He said his best play of the season came during a victory over Parklane, a game Hayles said the press had dubbed the “Mud Bowl”.

“Coach had me lined up at defensive tackle going against a guy that was like 6-foot-6,” he said. “I beat him pretty good and I caught the running back in the backfield as soon as he caught the pitch.”

Hayles said the play stuck out because it was the first of the second half and it set the tone for his defense the remainder of the game.
Though Hayles spends a great deal of time playing along the offensive line as well, he said the defensive line — specifically defensive tackle — is his favorite.

“That is where I get to read what the offensive line is doing the most,” he said.

Anderson said Hayles has been a great team leader by leading by example.

“He just does it the right way, and gives it everything he has,” Anderson said. “He is great with his footwork and his hands.”
“He is a very integral part of what the team does on both sides of the ball.”

The defensive player Hayles most tries to mold his game after is, like most defensive lineman and linebackers to make this list, Houston Texans defensive end J.J. Watt.
He said he admires the high motor Watt has and the positive image he has maintained with the media.

Powell said the player he feels his game is most similar to is Deion Sanders.

“He had that swagger that says ‘I’m better than you and I know it and I’m going to show you’,” he said.

The senior defensive back added that though he may be on the smaller side and oft underestimated, he enjoys going out on the field and proving he has the heart to make plays.

“I really like being underestimated,” he said. “It takes heart to play this game so I want to go out and show that I have heart and I can play just like them.”

He went on to add that what he enjoys most about football is the contact and the lessons it teaches that players can take away from the field.

“It teaches you how to pick yourself up in tough times and to keep going,” he said.

Each player had different answers when asked which game they were most looking forward to this season.

Powell said he looked forward to a rematch with Madison-Ridgeland Academy, the team that put them out of the playoffs. Hayles on the other hand, said the rivalry matchup against Brookhaven Academy was the game he was most excited for.

After coming one game short of the state championship last year, both seniors said their goal was to go the distance this year.

With fellow Primetime 23 member Landon Murphy in the backfield and the two of them bolstering their defense, a run to the state championship should not only be considered feasible, it should almost be expected.

The Primetime 23 list is a compilation of the top 23 players in the area. The next member of the list will be revealed in Wednesday’s edition.

Photo by Anthony McDougle/Matthew Craft (left) and Bobby Pritchard look to lead the way on the offensive and defensive lines... read more