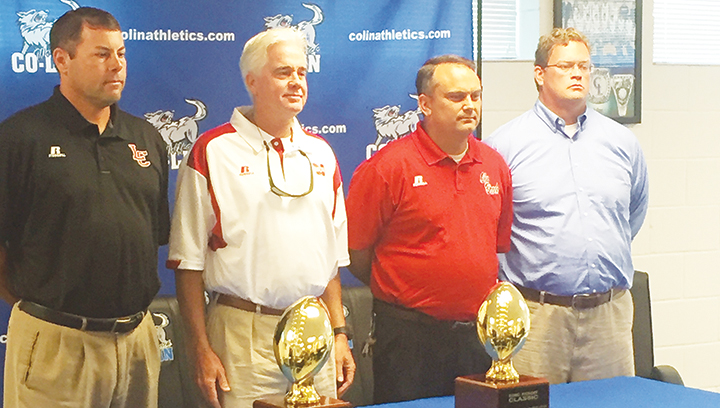 In an effort to show its dedication to area schools and highlight four schools that have shown high performance in athletics as well as academics, King’s Daughters Medical Center and Copiah-Lincoln Community College have collaborated to present the inaugural KDMC Kickoff Classic.

“We are very happy to be hosting the Kick-Off Classic on our campus,” Co-Lin President Ronnie Nettles said. “It provides us another opportunity to showcase our campus and to support our local high schools and their student athletes.”

The classic will consist of two games that will be played at Stone Stadium on the Co-Lin campus Aug. 18 and 19.

The game on Thursday will feature  the Lawrence County Cougars and the Magee Trojans. In Friday’s game, the Brookhaven Panthers and the Franklin County Bulldogs will square off. Both games will kick off at 7 p.m.

KDMC and Co-Lin held a press conference for the coaches and area media Wednesday to provide further information leading up to the games.
The coaches fielded questions from the media during the conference and also asked some of their own  about the logistics of game day at Stone Stadium and its facilities.

KDMC Director of Marketing David Culpepper said the idea for the classic had been in the works for a couple of years and added that everyone is looking forward to competitive and well-played football games.

“We wanted to highlight four schools with rich traditions of academics that have sent a lot of kids to Co-Lin,” he said.

All four of the coaches said they and their teams were looking forward to playing in the first edition of the KDMC  Kickoff Classic.

“It’s exciting to see this get off the ground after three years,” Brookhaven head coach Tommy Clopton said. “I think it is a great opportunity for the kids to be on a college campus, but I also think it’s the beginning of something that can grow.”

As a former athlete and student at Co-Lin, Lawrence County head coach Jaymie Palmer said it was something he and his team were also anticipating.

“I’m excited about it,” he said. “I polled all of our seniors when David asked me about it and every one of them wanted to take part in it.”

The winner of each game will be presented with hardware resembling the state championship trophies.