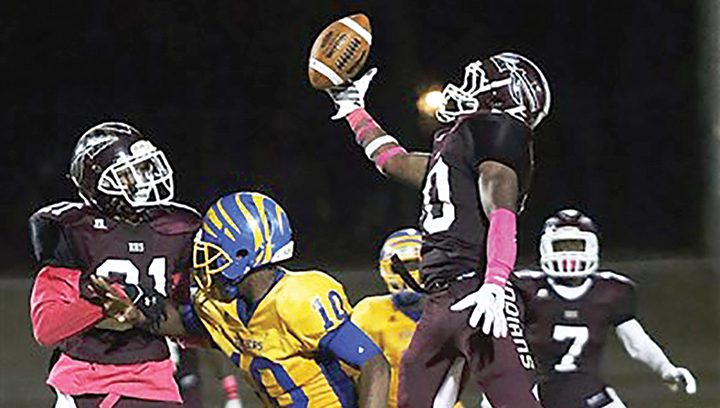 The middle linebacker of a defense is often thought of as the “quarterback of the defense.”  This player usually needs to be one of the smarter, if not the smartest, players on the defensive unit.

He should be a student of the game, someone who ensures everyone is doing his  job and who knows what the offense is doing before they even do it.

Junior linebacker Tim Steward is all that and more for the Hazlehurst Indians.

“Tim is not just the leader of the defense, he’s our overall team leader. Everyone looks up to him,” Hazlehurst head coach Todd McDaniel said. “We will go as far as he takes us.”

McDaniel had only great things to say about his star defensive player.

“He is not only the best player on our team, he is the best in our district. He’s one of those kids you wish you had 20 of,” he said.

Steward totaled a jaw-dropping 151 solo tackles, two interceptions and 10 sacks. Steward said one of those interceptions serves as his most memorable play from a stellar season.

“It was in our game against Jefferson County. It was like third down,” he said. “The ball popped up off one of our defenders and I grabbed it one-handed out of the air and scored it.”

Plays and statistics like that are becoming the norm for Steward at Hazlehurst. Last season marked the second in a row the defensive standout was named Defensive Player of the Year for the Indians.

He also received recognition at a higher level as he was named the District MVP and was the youngest player named to the first team All-State defense.

How does one improve on a stellar season like that?

In addition to seeing an increase in what were already great statistics, Steward set more lofty goals for himself and for his team.

“I want to be Defensive Player of the Year and first team All-State again, win a state championship and lead the state in tackles,” he said.

The junior phenom also spent time in the offensive backfield for the Indians. Though he did not get many touches there last season, he said he expects that number to go up in 2016.

Already serving as the Indians’ defensive catalyst, taking carries at the running back position is sure to take a toll on Steward in the season. However, he said it is something he has prepared for.

“On off days during the dead week, I ran, flipped tires and ran the bleachers like 10 times,” he said. “I’ll be ready to carry that load when the time comes.”

As the leader of the defense, Steward said he makes it a priority to study as much film as he can in order to understand opposing offenses and improve on his mistakes.

“I spend about two hours a day watching film,” he said. “I watch each film three times. First, I watch for my mistakes, then I watch to see how I can fix them and then I watch what the offense does so I can try to figure out how to stop it.”

In addition to his high football IQ, Steward said he felt his best assets were his speed and quickness. When asked to identify his weakness, he said he felt he did not have any and his numbers honestly suggest as much.

“I just need to get bigger,” he said.

The slight stature of the All-State linebacker will likely prompt a move to another position should he receive any offers to play at the next level. Steward said he knows he may have to shift to safety but added that he does not feel the transition will be tough for him.

The junior linebacker said he molds his game after his relative and former Hazlehurst standout Demetrius Cain, who now plays at Troy University. Cain helped lead Hazlehurst to its last state championship in 2012 with a 21-20 victory over Charleston.

Steward said he admired his cousin’s work ethic and determination. Because of  Cain, he said, he will be wearing No. 2  instead of 10 for the Indians this year. Cain wore the No. 2  during his tenure at Hazlehurst.

He added that though he molds his game after Cain, J.J. Watt is his favorite player because of his high motor.
Steward said he is not excited about playing any one team in particular this year.

“I’m looking forward to playing every team on our schedule this year. If they line up across from us, I’m ready to play them,” he said.
As for his head coach, McDaniel said he is just anticipating what Steward has in store for the Indians and the opposition in 2016.

“We expect him to be what he always has been for us,” he said. “He’s just one of those kids you can’t wait to see on Friday nights because you know he has a chance to do something special.”

The Primetime 23 list is a compilation of the top 23 players in the area. The next member of the list will be revealed in Friday’s edition.

Photo by Anthony McDougle/Azar Myles returns as one of the leading tacklers for Lawrence County. He and Kemarcus Brown combined... read more