Primetime 23: Vardaman takes no plays off on the field 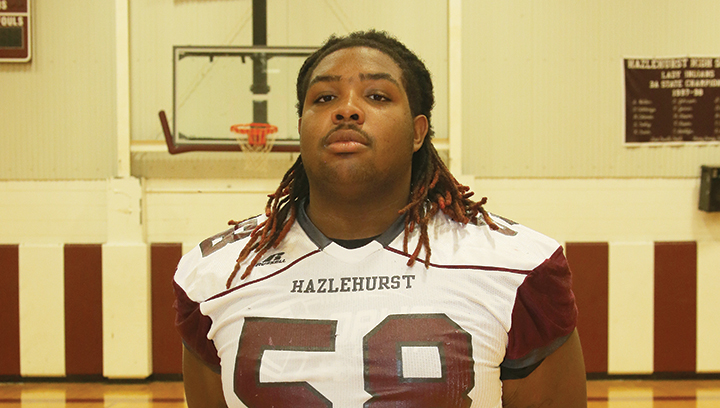 Each summer, Dan Mullen and his coaching staff summon several of their top recruits to the city of Starkville for Big Dawg Camp.

The camp not only gives the coaches an opportunity to see what the players can do against top talent, it also provides the players a chance to pit themselves against that talent while gaining knowledge from coaches in the competitive Southeastern Conference.

Hazlehurst’s offensive tackle Shauntavis Vardaman was one of those players in attendance at the camp.  With the school already being his primary destination of choice after graduation, the moment served not only as a milestone for the senior but also as a learning experience.

“They got on me a few times so I had to stand my ground,” he said. “It got a little frustrating but I learned a lot there.”

Vardaman said one of the toughest matchups he faced there was incoming Mississippi State freshman and former Dandy Dozen Kobe Jones.

“They got me when I was on the offensive line, but when I lined up on defense none of them could hold me,” the All-State lineman said.

After the season he had in 2015, he had definitely earned the right to be there.
The 6-foot-5, 315 pound lineman was named a first-team All-State offensive lineman and tallied an absurd 78 pancake blocks as the anchor of the Indians’ offensive line.

Vardaman also had 63 tackles  and eight sacks for the Indians in limited play on the defensive line.
Simply put, the lineman is a physical freak of nature.

“I have never coached a kid with his size and athletic ability,” Hazlehurst head coach Todd McDaniel said. “He is one of the strongest, most physical players in all of high school football.”

Vardaman is not a one-trick pony either. He also plays basketball and is a member of the track team at Hazlehurst. He said he averaged close to a double-double as the Indians’ center and made it to the state championship in track competing in the shotput and discus events.

Though he has the size, strength and ability to be a more than capable defensive lineman, Vardaman said he prefers to play offensive lineman.

“For one, in the NFL they get paid more,” he said. “A lot of people might not know your name but the quarterbacks need the offensive lineman for everything to go right.”
“Defense wins championships, but offenses win games to go to championships,” he said.

Of all the plays the All-State lineman made for the Indians last year, he said a sack against Wilkinson County stood out in his mind as the most memorable.

“It was fourth down and one and they decided to throw,” he said. “Coach told me to get in there and make a play and I remember getting a burst of energy. I dipped and ripped and got through for the sack.”

Vardaman said that play was memorable to him because it was an impact play that came at a clutch moment.
McDaniel said Vardaman’s playmaking ability gives the Indians an edge in the trenches whenever he is on the field.

“He is a big physical lineman that gives us an advantage wherever he plays.  He dominates on both sides of the ball,” McDaniel said.

Despite the outstanding season, Vardaman said the loss against West Marion is still hard to swallow.

“That game was crazy,” he said. “We went from averaging 40 points a game to scoring only eight in that game. The atmosphere was crazy there, but I don’t feel like we should have lost that game.”

Heading into the upcoming season, the senior lineman said he would like to improve in pass protection.

“We play out of a Wing-T formation, so we run the ball a lot. At the camps I go to, they look at me for pass protection and I’m not strong there yet so I’d like to improve there.”

Being a Mississippi State fan and hopefully a future player, Vardaman said his favorite player is former Bulldog Preston Smith. He added that Nelson Adams is a guy he tries to mold his game after because he has a high motor and he  never stops.

The senior said he would describe himself as a “savage” on the field.

The Primetime 23 list is a compilation of the top 23 players in the area. The next member of the list will be revealed in Sunday’s edition.