Church is where the heart is 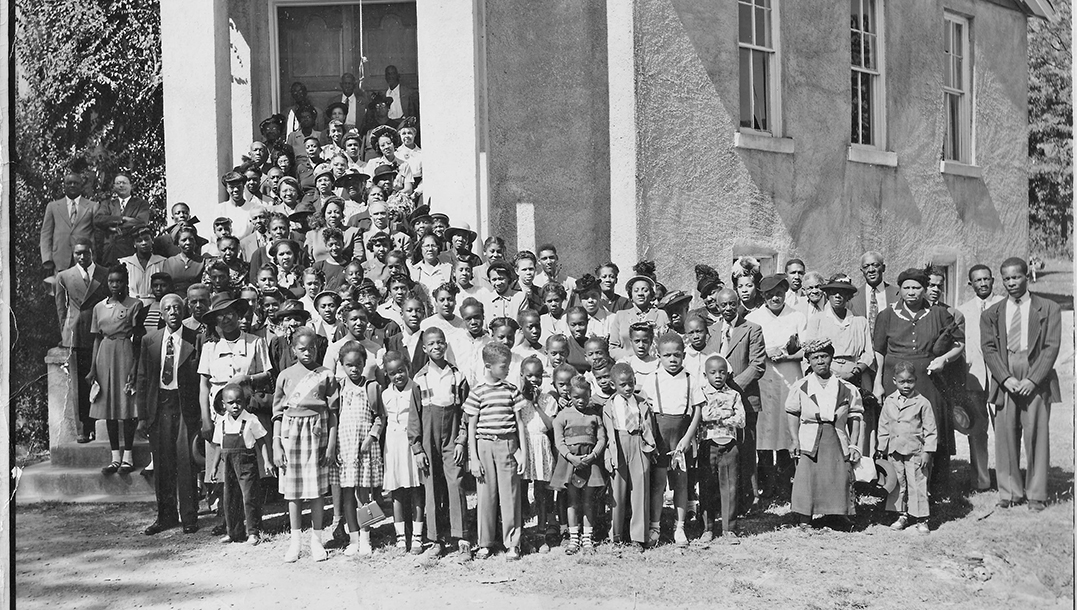 Despite being a regular hub of activity, St. James Missionary Baptist Church was empty on the Monday afternoon Pat Dow, church publicity chair, and Jonnie Sullivan, chair of the anniversary celebration, met to discuss the 150-year history of the church.

“It’s all because of God’s grace that we’ve been here 150 years,” Sullivan said. “It’s important that the children know the history and know how far we’ve come. He has blessed this church.”

The church’s longevity has been a direct product of committed members and pastors that are focused on God’s word.

Successful leadership has also been a cornerstone of the church’s history. Before a new pastor is chosen, the members are always in prayer.

“We know God is the one who calls the leaders,” Dow said.

Perhaps more impressive than the church being active for 150 years is that, in all that time, they have only had nine pastors, and just five since 1913. 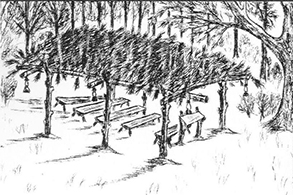 Diagram of a brush arbor similar to what was used as a gathering place when St. James first formed as the First Baptist Colored Church in 1913.

The church was founded in 1866, just one year after the American Civil War. Rev. George Black, of Vicksburg, gathered former slaves to a brush arbor and started the First Baptist Colored Church. As the church grew, the congregation relocated to its first frame structure on South First Street, where the Seventh Day Adventist Church is today.

In 1902, the church relocated to Minnesota Street after purchasing the property for $80. It was at this location, the church was able to eventually build its first brick structure. The church stayed at this location for nearly 100 years before relocating to Monticello Street in 1998.

It is this most recent move that the women used as an example of God’s grace. Not only has the church thrived, but the mortgage was paid off in only four years.

“We did not do any community fundraising,” Dow said. “We just did what God tells us to do — tithes and offerings; we are truly a tithing church.”

For Dow and Sullivan, St. James is their home, and the members are their family.

“My whole family’s been in this church,” Dow said. “This is my home, and I love my church family.”

In fact, when Dow moved to Texas for a while she never moved her church membership.

“When I came back, the warmth was here,” she said.

For Sullivan, her family’s history is closely intertwined with the church. Her parents were married by P.T. Thadison, who served as pastor from 1925 to 1968. Her father served as a leader in the church in many capacities, including as trustee, usher and deacon.

Meanwhile, her mother holds a place in many of St. James’s older members’ hearts and memory as the director of the Easter pageant. She would wrangle 200 children as they presented speeches, performed skits and sang in the choir.

“The church would be packed — standing room only — on Easter at 6,” Dow said. “And there was no air-conditioner.”

Everyone would meet after school every day for rehearsal, and the children were required to participate. Sullivan remembered as a 17-year-old trying to get out of the pageant, but her mom said she had to perform in the choir.

“You had to do something — you’re going to sing, give a speech or be in a skit,” Sullivan said. “That was a fond memory for a lot of people.”

Dow’s fondest memories are the ones that she experienced every week.

“There was a lady that sang in the choir — Lila Brown,” she said. “She would sing ‘Just a Closer Walk With Thee.’ I lived for Sunday mornings to hear Ms. Lila lead that song.”

Dow also recalled as a child receiving money from her parents to give in Sunday School and in the morning worship service, but instead they would keep a little bit from each and sneak across the street to the mom-and-pop store.

“And hopefully no one would tell Mom and Dad,” she said with a laugh.

“We’re not a church that allows people to sit and suffer,” Dow said.

The church has also sponsored teams through the Brookhaven Recreation Department for football, baseball and softball. There’s a Girl Scout troop hosted by the church. Until Brookhaven School District sponsored an after school program, the church held a tutoring program. Last summer, the church even helped those who failed the Third Grade Reading Gate by giving them one-on-one time with teachers.

“When we see a need in the community, we help with it,” Dow said.

Sullivan recalled a fundraiser the church held to help three young men attend college in Selma, Alabama. The choir recorded a tape to sell and held a fish fry to raise more than $3,000. With that money, they rented a bus to travel to Selma and perform a benefit concert. All that money went toward the men’s college tuitions.

Beginning Monday, the church will hold a pre-anniversary revival at 7 p.m. nightly. A history skit will be performed Saturday at 6 p.m. and the celebration will be held Aug. 21 at 10 a.m. Guest speaker for the revival and anniversary services will be Rev. Robert C. Jointer, pastor at Bethesda Baptist Church in Portland, Oregon.

Although this week will be the main event, the church has been celebrating all year long. Starting in February, the church held the Dan Brown Scholarship Banquet and continued the celebration through a new twist on Black History Month. Instead of recognizing national heroes, such as Dr. Martin L. King Jr., the youth of the church showcased those in the church that had accomplished great things.

In March, they held a prayer vigil followed by fellowship.

In April, their pastor, the Rev. Dr. Larry Jointer, was honored for his 21st anniversary and the three-night spring revival was held.

In May, church members recognized women of the church — past, present and future — who have influenced their faith. The women were recognized with a brunch. The church followed up in June by recognizing men.

“They didn’t want brunch, so they had a feast,” Dow said.

Along with the pastor’s motivational speech, members such as Brookhaven Police Chief Bobby Bell spoke about the men from the past who have had an effect on them.

Family and friends were celebrated in July with a luncheon after the worship service.

The celebration will continue in October with the Men’s and Women’s health fair. In the past, it has been centered on prostate cancer, but this year they chose to expand it to include a variety of health professionals and agencies.

In December they will host a musical/cantata for Christmas. At that time, they also plan to gather souvenirs from throughout the year long celebration to place in a time capsule.

Members of St. James Missionary Baptist Church gather outside the church located on Monticello Street in 2013.

For this week’s lifestyles cover, I was able to sit down with two long-time members of St. James, Pat Dow... read more