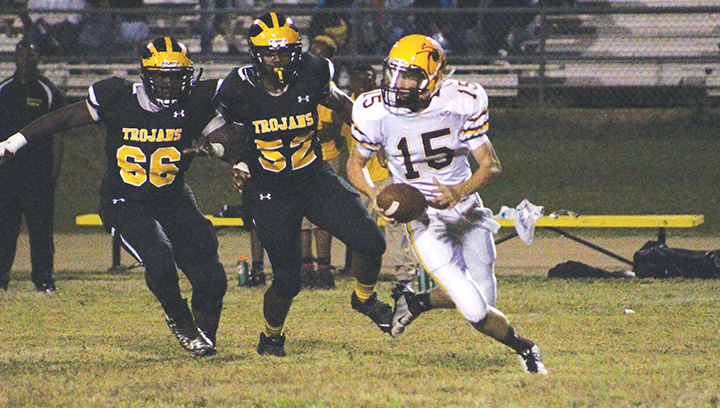 File photo/
Quarterback Zach Hodges will pose as much of a threat with his legs as he will through the air for the Yellow jackets this season.

The Enterprise Yellow Jackets saw their three-year winless streak finally come to an end last season after a 4-6 campaign. Head coach Brooks Burns knew how important overcoming that adversity was  for his team’s psyche.

“Our guys realized they could compete. Winning improved their mindset,” he said.

There are eight returning Jackets’ starters on each side of the ball and Burns is hopeful they can keep trending up heading into the 2016 season.

“Attitude and work ethic are important in continuing to improve,” the coach said. “It depends on our kids if we will be successful.”

On offense, Burns and his team will look to trim down the penalty yards and turnovers that plagued them last year.

The Jackets’ offense is based out of an I formation. The Jackets will likely give opponents a heavy dose of their running game each night. Senior quarterback Zach Hodges will lead the offensive charge.  Hodges accounted for 288 passing yards and 388 rushing yards for 14 total touchdowns in 2015.

On defense, the Jackets will base out of an odd front with the Cover 2 or 3 in the secondary. Burns said the secondary should be the strongest unit on the defense this year.

Jeffrey Daniels will lead the way for a linebacker corps of senior Devin Kirtfield and Trestin Green. Daniels returns to the gridiron for the first time since suffering a broken leg during baseball season.

The duo of Thames and Diamond will anchor the defensive line along with junior Danny Thomas. Burns said he expects around 35 players to suit up this fall.
Enterprise begins its football season at home against Ethel Aug. 19