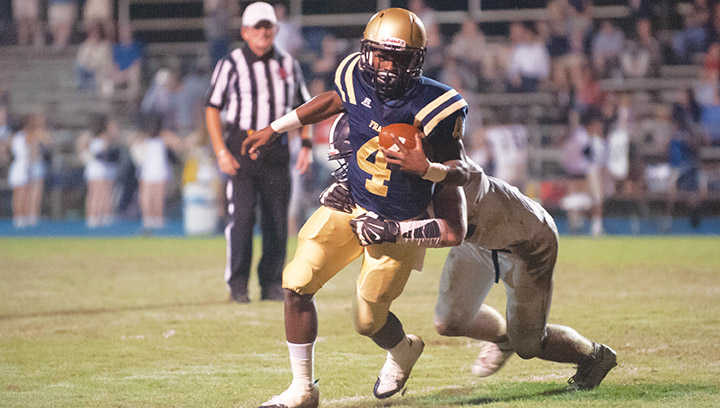 File photo/
With one of the deadliest athletes in the area in De’Martre Collins, the Franklin County Bulldogs look poised to get back to their winning ways this year.

Change at the head coach position has been rather frequent for the Franklin County Bulldogs. With the recent departure of former head coach Anthony Hart, the Bulldogs were left reeling and had to conduct their seventh head coach search in 11 years.

Luckily, the team did not have to look any further than its assistant coaching staff to find a replacement in Trey Woodard.

Woodard inherits a team that had a substantial amount of success last season. The Bulldogs were 8-5 overall and only lost one game in district play, a 24-7 loss to district champion Hazlehurst.

Woodard said he and his staff were pleased with the team’s performance last year.

“I thought we performed very well. We were a young team,” he said. “Most of the defense was sophomores but I think we got the most out of having young starters as we could.”

With the 2015 season in the books, Woodard and his team are looking to improve on a successful season that saw the Bulldogs reach the second round of the 3A playoffs.

Woodard admits the Bulldog defense will likely carry the team, but added there is a lot of talent on the offense as well.
Junior quarterback Jacob McDaniel (6’, 175 pounds) will lead the offensive unit. McDaniel passed for 707 yards last year with seven touchdowns and rushed for 207 yards and five touchdowns.

McDaniel missed the latter portion of last season with a lacerated spleen but Woodard said he has a clean bill of health. His experience will be needed on a young offensive unit.

The running back position is one that lacks depth for the Bulldogs. But, what they lack in that area, they compensate for with talent. Keonte Bee’ will see a significant amount of carries out of the backfield, as will superb athlete De’Martre Collins.

Woodard raved about the talented Collins, calling him the team’s “best all-around athlete.”

“With the ball in his hands he is the deadliest kid we have. He has the most experience with the ball,” the head coach said of Collins.

Fans can expect Collins, who had over 1,000 all purpose yards and 16 touchdowns, to line up at several different positions on offense.

The Bulldogs’ defense unit is a year older and equipped with talent in nearly every position.
Stalwarts La’Darius Norman and Cameron Young will lead the Bulldog defensive front.

Young checks in with insane measurables and numbers. At 6’ 5”, 255 pounds, he is sure to pick up where he left off last year, when he tallied 75 tackles, nine sacks, eight tackles for loss and two passes defended.

Dominick White (64 tackles, two sacks) leads a young unit at linebacker. White will be expected to step up and take leadership of that unit.

Of all the units on the Franklin County defense, the secondary may be the one that Woodard and his staff are the least concerned about. That is because it is led by what could likely be two of the best defensive backs in the area in Keonte’ Bee and Deione Buckles.

Woodard will begin his first season as Franklin County’s head coach Aug. 19 when his team squares off against Brookhaven in the KDMC Classic at Co-Lin.

File photo/Led by Charl’Tez Nunnery, Quitten Brown and an endless stable of running backs, the Cougars will likely look to... read more