Gridiron 2016’s Loyd Star preview: “Our kids can just pick up where we left off” 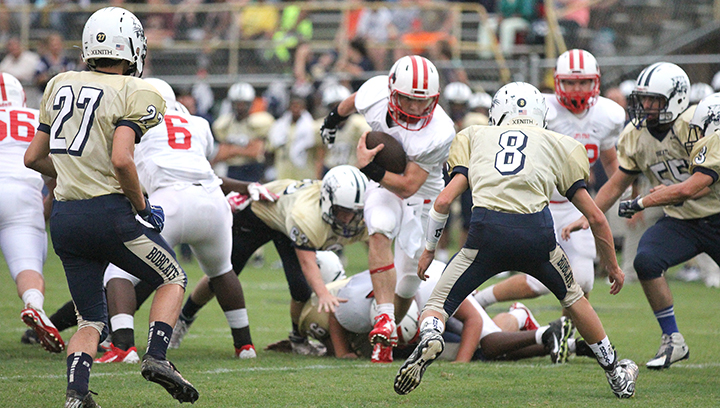 File photo/
Afer getting back into the playoffs last year, a veteran Hornets group led by All-State selection Parker Flowers (above) looks to continue trending upward.

The team managed to get back into the playoffs, went undefeated against the other local schools (West Lincoln, Bogue Chitto and Enterprise) and finished strong in one of the toughest districts in 2A football. Cook said he felt those accomplishments are huge for the program.

“It keeps excitement in our program. Now I think we have set a standard. We know we can make it, we know we can advance,” he said.

With that confidence, he and his team look to build on last year’s 4-8 record.
Cook has 10 returning starters on each unit this season, which makes the Loyd Star Hornets one of the most experienced teams in the area. Because of that number he said he would be looking to his entire senior class to step up and lead the squad.

“It definitely gives us an experience edge,” the coach said. “Our kids can just pick up where we left off.”

Even with the progress made last season, Cook still saw areas in which his team could improve.

“We need to have a desire to finish and push through tough challenges. When we played teams that usually beat us our kids weren’t ready to push themselves,” Cook said.

He said if his team can believe they can compete at a high level, they have a chance to be solid in 2016.
First team All-State defensive selection Parker Flowers, the heart and soul of the Hornets, will likely be the team’s leader on offense and defense.
Cook raved about the talent the senior linebacker and running back possesses.

“Parker is mentally tough and such a gifted athlete. He gives it all he has and always seems to play with a chip on his shoulder,” he said.

Flowers will not be alone in his efforts this season.

On offense, sophomore receiver and return specialist James Beard returns to provide a spark. Beard was named to the All-State second team defense for his contributions on kick and punt returns but he is a more than capable receiver as well.

He had 23 receptions for 466 yards and six touchdowns for Loyd Star last season. For some perspective, that averages out to almost 21 yards a catch, or two first downs a reception. After leading the team in rushing with 1,028 yards and 16 touchdowns, Flowers will likely get the majority of the touches out of the backfield this year.

On defense, junior linebacker Tucker Watts  and defensive backs Patrick Price and Blake Ramsey will be expected to be leaders as well.

Price proved to be a capable defender last season as he came up with three interceptions and nine deflected passes. Senior defensive back Konner Allen (59 tackles) should also make some valuable contributions.

As far as expectations for his veteran squad, Coach Cook kept it relatively simple.

“I expect our kids to play to their potential and finish,” Cook said.  “As long as we do that and have fun in the process, we have a chance to be really good.”

The Hornets will begin their season Aug. 19 with the annual Possum Bowl against rival Bogue Chitto.

File photo/The West Lincoln Bears are hoping to avoid the injury bug after they were decimated by injuries last season.... read more