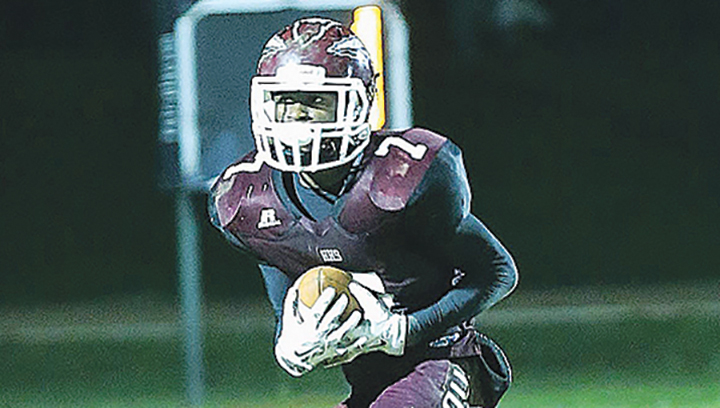 Every so often during SportsCenter on ESPN, there is a segment called “Numbers Never Lie.” In that segment, the folks at Sportscenter use logic and numbers to validate a point they are attempting to make.

While true, there are many cases  that can be won or lost with a glance at  a stat sheet or score box, sometimes  numbers can be misleading.

When looking at the numbers of the Indians’ wideout, many might assume he was not up to par with the other Primetime 23 receivers.
West Lincoln’s Chase Owen highlighted the position after reeling in 41 passes for 763 yards and 11 touchdowns in what was not even a full season.
Loyd Star’s James Beard had 23 catches for 466 yards and six touchdowns as a freshman and gave special team’s coaches nightmares to lock up a spot in the Primetime 23.

That means he had an insane 34.5 yards per catch. That means 55 percent of the time, a caught ball by the Indians’ No. 7 last year meant a touchdown.
Those numbers don’t begin to tell the story of the importance Tillman’s output served to his team last year. That doesn’t bother the senior because he knows this year he will get more passes thrown his way.

Tillman returns as the top target for new quarterback Quamead Stewart, a position he said he had to earn when new head coach Todd McDaniel came into town.

“I have always felt like I was good,” Tillman said. “But, Coach Todd didn’t know that when he got here, so I had to prove it to him. I started out as a blocking receiver and playing special teams.”

Being in that position gave Tillman a chance to take advantage of his physicality and also was the product of one of his most memorable plays.

“We were  receiving a punt in the game against Forest and one of their players tried to make a play and I got a big crackback block on him. Every time I see it on film I smile,” Tillman said.
That physical nature helps Tillman on defense, where he plays cornerback for the Indians.

He has proven himself one of the most consistent defensive backs for Hazlehurst  over the past two years. The senior has 64 tackles, three interceptions and five pass deflections over that span.

“Jaquaveon is a big part of our program,” McDaniel said.
“He is very well rounded and gives us a big play threat on offense and he is also a great corner.”

Tillman said he enjoys playing on the defensive side of the ball, but wide receiver is his favorite position.

“I like having the ball in my hands and getting opportunities to score and make big plays,” Tillman said. “I feel like I’m a big playmaker.”

The senior said he believed he had several assets that help him succeed at receiver.

“I have good hands,” he said. “Last season I dropped few, if any,  passes and I also think I run good routes and block really well.”

McDaniel said as much about the senior while also touching on other things Tillman does well.

“He is very elusive offensively and has a good football IQ. As a defensive back, he reads routes very well,” McDaniel said.

After last season’s shocking loss in the playoffs to West Marion, Tillman said he would like to see his team on the same page and locked in on their mission to get to the state championship game in Starkville.

He also had individual goals set for himself.

“My goal this year is to improve on last season and get more scouts looking at me,” he said.
“I’d like to have at least 1,000 receiving yards and more catches and touchdowns than last year. I just want the ball.”

Tillman said he is currently drawing interest from junior colleges Jones, Northwest and Holmes. Scouts from Memphis and Southern Miss have also come to a few of Tillman’s games.
Before a state championship or collegiate offers can come, Tillman said he knows he has to work even harder in 2016.

“I want to get better at looking the ball in, blocking and I need to become more fundamental,” he said.

If Tillman continues to remain a consistent big play threat for the Indians in 2016 that can adequately complement their fierce running game, all of his goals could quickly become a reality.

The Primetime 23 list is a compilation of the top 23 players in the area. The next member of the list will be revealed in Tuesday’s edition.