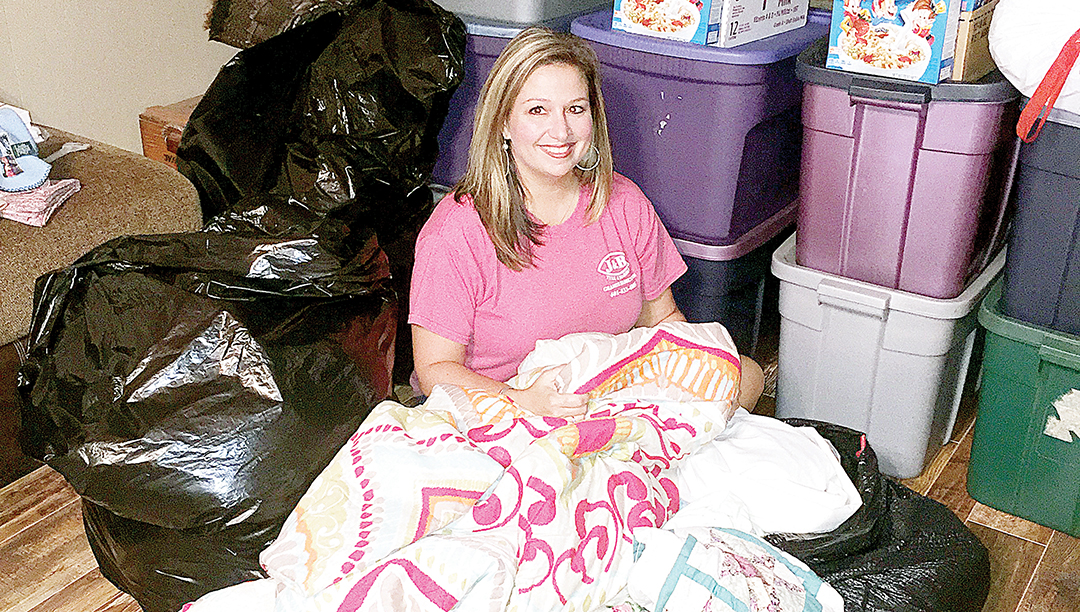 Photo by Amy Rhoads/Aimee Stinson sits among boxes and bags of clothes and supplies donated for her family and their neighbors in South Louisiana, where she’s from originally. She said she is thankful for the outpouring of love and generosity she’s seen from Lincoln County residents.

Several churches, organizations and even caring individuals are doing their part to help those forced out of their flooded homes in South Louisiana.

Macedonia Baptist Church, a dispatcher at Lincoln County Sheriff’s Office and the Loyal Order of Moose 1968 are collecting clothing, food, supplies and bedding for families displaced because of the flooding in Baton Rouge, Denham Springs and surrounding areas.

Downpours last week have sent at least six river gauges to record levels in Louisiana, according to media reports. This includes the Amite River, which exceeded its previous record by over 6 feet in Magnolia, and by over 4 feet in Denham Springs.

Mike Steele, communications director for the Louisiana Governor’s Office of Homeland Security and Emergency Preparedness, said more than 1,000 homes have been flooded in Baton Rouge, and that number that is expected to climb. In Livingston, more than 1,000 homes have been flooded, along with 200 in St. Helena Parish, and 500 or more in Tangipahoa Parish.

The church is located at 1230 Macedonia Road NW.

Aimee Stinson, who works at J&B Tile and Marble in Brookhaven, has family who has been displaced because of the flood. She put out the call for help and her friends at Macedonia and throughout the business community in Brookhaven responded. “It’s the only thing that I felt like I could do at this point,” she said.

Stinson, who is a South Louisiana native, said her grandparents’ homes are total losses. 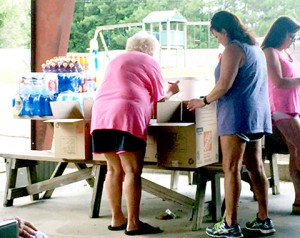 Photo submitted/Members of the Loyal Order of Moose 1968 gather supplies to take to Livingston Parish in Louisiana.

She said donations have been pouring in since it was announced on Facebook Monday morning. “We’ll be able to bring different things that they need. Most people have lost everything,” she said. “We need anything that they would need that would help make this a little bit easier.”

Of all of her family in Louisiana, only her parents, a sister and one cousin were able to avoid having their homes flooded. Now, everyone else in the family — as well as some of those family members’ neighbors — are divided up between those three homes. She said some of her relatives have up to five families in their homes.

Many of those who are displaced did not have time to pack.

“Basically, they have the clothes that they left with,” Stinson said.

Adding to that is a lack of banking and ATM availability because of the flood. “Most places are ‘cash only’ right now,” she said. “So, what you have to be able to spend is what you have in your pockets.”

Stinson said the outpouring from the community has been wonderful. “Different people that I’ve known have been messaging me asking what can they do, what do I need,” she said. “The community here is a very giving and loving community.”

Jessica Kyzar, a dispatcher at LCSO, and her husband Jason wanted to help out when they saw the reports of the widespread flooding. She said she remembers what it was like in Lincoln County after Hurricane Katrina pushed storms through the area.

“I remember how hard everything was and it’s going to be difficult for them,” she said. “My heart is telling me to do this.”

The Loyd Star couple has arranged for drop-offs at several locations.

After-hours drop off at the sheriff’s office is available. Cut off is noon Wednesday there.

Donations can also be left at the Ruth Volunteer Fire Department through 3 p.m. today and at Detour 51 until noon Wednesday.

They’re planning to take a trailer filled with supplies to Louisiana Wednesday afternoon.

The Kyzars are working with local businesses to gather donations of feed for cattle and horses in those areas that are flooded as well.

“We farm, so we were concerned about that,” she said.

Stephanie Allen said the Moose Lodge has already taken one trailer load of donations — all collected Monday — to Livingston Parish. They’re dropping items off at Satsuma Baptist Church there and the church distributes it to those areas hardest hit, she said.

Lodge members rallied as soon as the call went out to gather donations and quickly filled one trailer.

Donations can be dropped off at the Brookhaven Moose Family Center, 1229 Calcote Loop NE, all day today. They don’t have a cutoff planned at this point. “We will accept it as long as it’s coming in. They’re in dire need,” she said.

The Lincoln County supervisors received an unexpected surprise Monday when they opened the lone bid for surplus materials at Keystone... read more