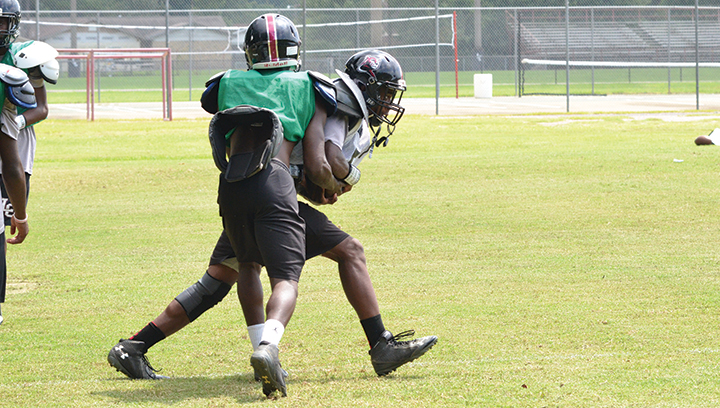 Photo by Anthony McDougle/
Nunnery (above) and the backfield will have to step up in Brown’s absence.

The time has finally come for high school football in Mississippi.

This week, high school teams all over the state will suit up with high hopes of getting to Starkville for the state championships.
In the area, two of the marquee games of week one of the 2016 season are both in the KDMC Kickoff Classic.

Tonight’s game features Lawrence County and Magee, while game two on Friday features Ole Brook and Franklin County. All four teams look to be solid heading into the season,  which could mean a couple of exciting evenings for any football fans who will be at Stone Stadium on Co-Lin’s campus.

Heading into tonight’s matchup between the Trojans and the Cougars, here are a few things to watch in the first game of the KDMC Kickoff Classic.

Cougar running backs
By now it is no secret that Lawrence County will be without Quitten Brown, their senior running back and the area’s best at the position. With Brown not on the field, the Cougars will likely have to rely on senior Josh Knight and a host of other runners to carry the load.

Quarterback Charl’Tez Nunnery proved his run prowess last year with 961 yards on the ground, so he should see a significant number of carries as well.

Battle of the trenches
Both teams are fielding offensive lines with relatively little game experience. The Cougars start four sophomores on the offensive line and recently lost their starting center to injury.

The Trojans are just as young but have youth on both the offensive and defensive lines.
The toughest games are usually won or lost in the trenches so should the game go down to the wire, look to the big bodies upfront to see who will emerge the victor.

Skills to pay the bills
One area where both teams should have little to no worries is the skill position. The Trojans return senior quarterback Tyrique Mcafee, who threw for almost 2,000 yards and 12 touchdowns, and 1,000-yard rusher Jadarius Payne.

They also return a reliable target at receiver in R.J. Hopkins. Hopkins reeled in 64 catches for 871 yards and 10 touchdowns last season.

The Cougars boast Primetime 23 players  Nunnery and tight end Marcus Atterberry. Nunnery also has two big targets above 6 feet in A.J. McLaurin (6’1”) and Kendarius Feazell (6’ 3”). With the Cougars playing without arguably their best player, the skill guys will have to step up to put points on the board.

Quarterback play
Both teams have seasoned quarterbacks at the helm of their offenses. Should this game be closely contested, it will likely come down to which one of the field generals makes a mistake first.

Photo by Anthony McDougle/Junior Deione Buckles is one of the best cornerbacks in the area in 2016 and is looking... read more