Quarterbacks get all the glory after their teams emerge victorious in a big game.

If a receiver breaks for a long touchdown, he is heralded as a superb athlete. The jobs of these players are truly important, but those plays are possible not possible if not for the efforts of players like Ben Cowart. 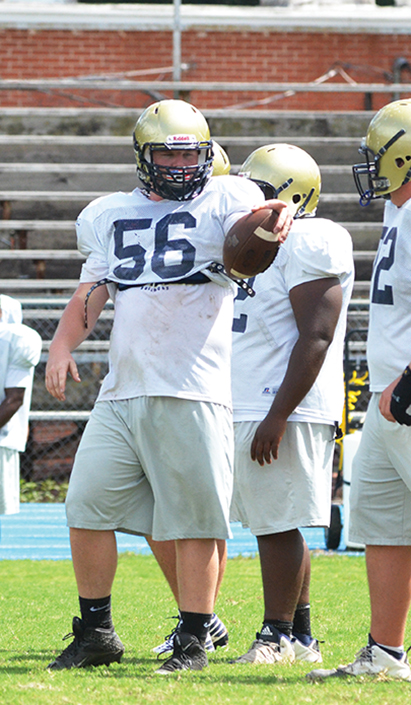 As the center, Cowart is responsible for ensuring the quarterback even gets the ball to make that pass to a receiver or a handoff to a running back.

“I realize that a lot of it comes down to me,” Cowart said. “If I don’t get the snap off, the whole play is dead.”

Though Cowart has a big job, the payoff for his efforts is not always as substantial. For the most part, centers do not get to accumulate the statistics that some of the other offensive linemen do.  He still does the same amount of heavy lifting, though.

“Centers have to do a lot of double teams and stuff like that. I know last year two of our key plays on offense involved me doing a double team,” he said.

However, accolades and statistics are not what concern Cowart. Last year, he was named to the All-Area team for his contributions at center, but said he has not set any individual goals for himself this season.

“I don’t focus on individual goals because I’m more of a team player,” he said. “I set a goal for myself every game and that is to get the snap off.”

“Ben is definitely making it a point to try and become a leader of our offensive line. He knows the plays and he does his job. He’s a player who is going to go out and work every Friday,” Woodard said.

Cowart, the eldest member of the offensive line, also said he considered himself a leader of the unit.

“I think they listen to me pretty well for the most part,” Cowart said of his offensive line. “I  have to get onto them every now and then, but they listen.”

Cowart has been playing the center position since the seventh grade. Since Franklin County did not have a peewee team during his younger days, he said that was when he began to develop a love for the game.

Years later, the senior said center remains his favorite position. However, he added that if given the opportunity to play elsewhere he would like to play offensive tackle because there are more opportunities for pancake blocks.

Although the position may have fewer opportunities in the limelight, Cowart said more goes into being a good center than people would assume.

“Centers need to have more speed,” he said. “You have to be able to adjust quickly from having your hand under you to coming up to make a block.”

As a center, Cowart naturally said he felt his best asset was his ability to snap. The senior said he may have botched three snaps in all of last season.

“Watt hustles every play. He works hard and he’s one of the best at what he does,” Cowart said.

Looking to this season, he said he is looking forward to playing Tylertown and Brookhaven. The Panthers have become a bit of a rival for the Bulldogs. They will face Ole Brook in the first game of the year in the KDMC Kickoff Classic. Cowart will likely have one of his toughest matchups all year long in that game in the form of 6-foot-3, 321-pound nose guard Jeffery Johnson.

The Primetime 23 list is a compilation of the top 23 players in the area. The full list of players is as follows: