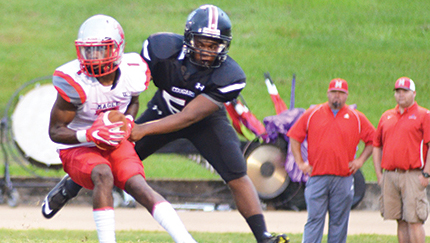 Photo by Anthony McDougle/Lawrence County’s Terrance Stanfield (right) sacks Trojan QB Tyrique McAfee during the first half of action between the two teams.

The first half of the game between Lawrence County and Magee played out like a heavyweight prize fight. The teams exchanged blows with one another in what looked to be a close contest to the very end.

However, the Trojans found their second wind after halftime and used it to emerge victorious 44-27 over the Lawrence County Cougars in the KDMC Classic at Co-Lin Thursday night.

Quarterback Tyrique McAfee and running back Jadarius Payne paced the Trojans’ offense. McAfee completed 14-20 for 215 yards while Payne rushed for 155 yards and two scores on 31 carries.

“It’s nice to have a big bruising back that can carry the load like that as well as a three-year starter who throws the ball well and knows the game,” Magee head coach Tim Coats said of his backfield duo after the game.

“It really shows me that our kids have character to be able to come out and play so well in the second half,” he said.

The Cougars’ top performer, quarterback Charl’Tez Nunnery, passed for 157 yards and two touchdowns and also rushed for 135 yards for two scores. Running back Josh Knight had nine carries for 57 yards for the Cougars.

Lawrence County head coach Jaymie Palmer said he felt his team did not play disciplined in the loss.

“We were very undisciplined tonight,” Palmer said. “There were several times where some of younger guys were just sitting and not coming down.”

The game had all the looks of a shootout early on. Magee quickly moved the ball downfield on its first drive of the game and punched it in for the score on a 7-yard run by Payne. Victor Lewis converted the two-point conversion to give the Trojans an 8-0 lead.

Nunnery and the Cougars answered with a drive of their own and scored on a 20-yard pass completion to A.J. McLaurin and a Gage White extra point to trim the deficit to 8-7.

Lawrence County’s defense forced a three-and-out on the Trojans’ ensuing drive and made the most of the opportunity.  After conducting a stellar drive, Nunnery crossed the goal line from six yards out to give his team a 14-8 advantage after the White extra point kick.

McAfee responded to the drive quickly and connected with Keshun Collier on a 14-yard pass after a decent drive by the Trojans to bring the score to 14-16 in favor of the Cougars.

As he had for most of the night, Nunnery put together a drive with the use of his arm and his legs and eventually trotted into the endzone from 21 yards out. However, a failed two-point conversion put the score at 20-16.

The Cougars managed to force another punt by Magee and capitalized. Nunnery completed a pass up the seam to Primetime 23 tight end Marcus Atterberry for a 35-yard score to go up 27-16.

With the half looming, McAfee and the Trojans put together a hasty drive capped by a 33-yard touchdown pass  to Victor Lewis to trim the Cougar lead to 27-22.

The Trojan defense seemed to settle in after the first half and the Cougars did not score again.  Payne took in a score from one yard out to give the Trojans a bigger cushion and defensive back Joaquin Blackwell stepped in front of a pass by Nunnery and returned it 82 yards for a touchdown to seal the deal for Magee.

After the loss, the Cougars will look toward next week’s home game against West Marion. The Trojans lost their first game of the season to Presbyterian Christian 45-26.

Photo by Tracy Fischer/Wesson safety Slay Acy carries the ball upfield as a McLaurin defender moves in to attempt to... read more