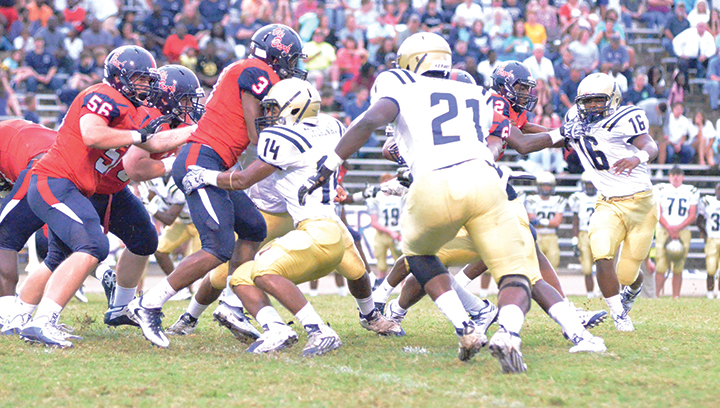 Heading into the 2016 season, Brookhaven head coach Tommy Clopton and his staff emphasized one thing to their team: start strong.

Apparently, the Panthers got the message.  Friday, they got off to a solid start this year by defeating the Franklin County Bulldogs 21-13 in the second game of the KDMC Kickoff Classic at Copiah-Lincoln Community College.

The Panthers’ sophomore quarterback Sevante Quinn completed seven of 15 passes on the night for 137 yards, two scores and one interception.
John Hilbert and Demarrell Leggett were his two biggest targets, as they both had 58 yards receving and one score.

Ole Brook running back Kenneth Dixon rushed for 143 yards while Leggett contributed 119 yards and another touchdown.
The Panthers were stout and physical on defense the entire night, and surrendered only one touchdown to the Bulldogs. That defensive effort was led by eight tackles from Jordan Blackwell and Isaiah Wall.

“Every time our backs were against the wall we fought back,”  Clopton said. “I’m very proud of them and I feel like they played really well.”
Both teams struggled with ball security at times during the physical contest. Brookhaven fumbled four times and lost two, while Franklin County fumbled three times and recovered all three.

Penalties were a problem for the two teams that are beginning to develop a bit of a rivalry as well. Ole Brook had 10 for 95 yards, while Franklin had eight for 45.

“We have a lot of first game mistakes we need to fix, but they are all fixable,” Clopton said.

For the Bulldogs, quarterback Jacob McDaniel completed 10 of 36 passes for 72 yards, while Collins had 83 all purpose yards and broke the plain once on a 16-yard scamper.
Gerryion Bell led the Bulldog defense with nine tackles, while Primetime 23 defensive end Cameron Young registered eight tackles and a sack.

“We executed poorly and that’s my fault,” Franklin County head coach Trey Woodard said.  “We have to improve and be consistent on offense. We had trouble stringing together a good drive.”

It was evident the game would be a physical, hard-fought and low-scoring contest from the intial kickoff.

The Panthers drew first blood after Quinn connected with Legget from 12 yards out. Legget was covered, but managed to shake off a Franklin County defender and reach the endzone to put his team on the board.

The Panthers botched the snap on the ensuing extra point attempt but freshman holder Byrion Robinson was able to think quickly on his feet and dumped a pass into the endzone to put the Panthers up 8-0.

“That play was huge for us in the first quarter,” Clopton said. “It puts pressure on them to go for two should they score on that last drive of the game. Byrion has a really bright future.”

Both defenses settled in after that, as neither would allow a score for the remainder of the half.
The Panthers found their way early in the third quarter, though. With a little over 11 minutes remaining, Leggett broke for a 64-yard touchdown run to extend Ole Brook’s lead to 15-0 after the extra point attempt.

Brookhaven had managed to regain possession after a punt by the Bulldogs, but an errant pass by Quinn was picked off by Clay Wright and taken back 75 yards for a score to put Franklin County behind 15-7 after Spencer Romero knocked in the extra point.

Not to be outdone, the  Panthers quickly responded with a score of their own.
The familiar duo of Quinn and Leggett connected for a touchdown from 58 yards out to push their lead to 21-7 after a failed field goal try.
The Bulldogs scored again in the fourth quarter on a 16-yard run from Collins to trim the deficit to 21-13 with under nine minutes remaining.

They were able to get possession of the ball for the last drive of the game but Jacob McDaniel was tackled inside the 10 as time expired to seal the deal for the Panthers.

Now, after avenging last season’s loss to the Bulldogs and getting off to a solid start, the Panthers will hit the road to face Northwest Rankin.
Northwest Rankin is fresh off a 34-7 victory over Germantown. The two teams met last season, with Brookhaven losing to the Cougars in a close game 21-14.