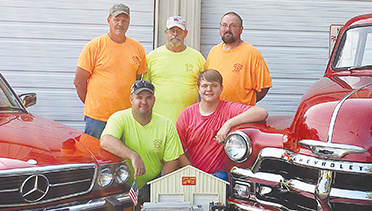 Submitted photo/Volunteers at the New Sight Fire Department are ready for the annual “Smoking Tires and Putting Out Fires” car show and festival Saturday. Showing off a handcarved replica of their new pumper is President Don Smith (back row, left), firefighter Roger Hill, Vice President Warren Allen; Chief Cory Smith (front row) and car show chairman Austin Smith. Funds from the festival will help pay for the pumper the VFD purchased in March.

The New Sight Volunteer Fire Department will be “Smoking Tires and Putting Out Fires” Saturday, rain or shine.

That’s the name of their fourth annual fundraiser, which will include a car show, unique one-of-a-kind tractors on display and lots of family-friendly activities, said New Sight Fire Chief Cory Smith.

Smith has been watching the weather carefully and is keeping his fingers crossed it will be a sunny day.

“We’ve done it in the rain, but not as many people came out,” he said. “The plan is, the show will go on, rain or shine.”

The fundraiser helps the fire department pay for equipment and put money toward its note for the new pumper it received in March, Smith said.

There will be arts and crafts booths for shoppers looking to buy early Christmas presents, he said.

One booth will include handmade wooden toys made by Mark Ballard of St. Francisville, Louisiana, said his aunt, Sandra Williams, of Brookhaven. Ballard was recently contracted by the firefighters to build a replica of the new pumper. It’s hand carved with working pieces, Smith said.

“It looks like it’s metal. It’s unbelievable. It’s all hand carved,” he said. “The doors open and the ladders come down. It’s pretty cool.”

The replica and the actual fire truck will be center stage at the car show, Smith said.

Food will be available for sale by the New Sight Baptist Church youth group. They’ll have hamburgers, hot dogs and cold drinks.

“They keep that money. That’s their fundraiser,” Smith said. “They’ve always helped us so we just gave that to them so they’d have a way to raise a little money.”

A free kids zone will be set up for young children with a bouncy house and a slide, he said.

Raffle tickets will be available for a 32-inch LED television. Tickets are $5 each or five for $20.

Entertainment will be provided by DJ T-Tommy.

They’ll also have a display of unique, one-of-a-kind tractors, but the star of the show — or rather, stars — is the cars and trucks

Entry is $20 — up to the start of the show — and all types of vehicles are welcome. “Classic to customer, old or new, cars or trucks,” he said.

Motorcycles aren’t included in the show.

Door prizes will be available for all registered entrants.

Prizes will be awarded for top entries including the Fire Chief Award for first place and the Sheriff’s Award for second place.