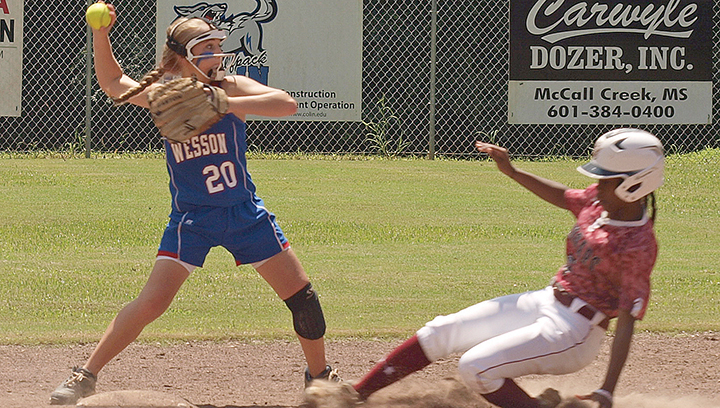 Wesson second baseman Arie Douglas tags out a Lawrence County baserunner and prepared to make a throw to first during the Cobras’ 5-2 victory over the Cougars Saturday.

The Wesson Lady Cobras hosted the Lawrence County Lady Cougars Saturday afternoon, and the Lady Cobras took the win with a final score of 5-2.

Both teams battled for the first three innings, but two homeruns in the bottom of the fourth by Sabria Green and Catherine Wilson put five points on the scoreboard.

The Lady Cougars came back in the top of the sixth with a double by Callie Fortenberry to add two runs of their own. However, the Lady Cobras’ solid fielding skills kept Lawrence County from making it to home plate and Wesson took the win.

Winning pitcher Riley Smith walked three batters. Big hitters for Wesson were Green with a homerun and single and Wilson with a two-RBI homerun. Green tallied three RBIs on the night. Katie Westbrook and Nikki Guess both had two singles each.

Hitting safely for Wesson were Aurianna Vaugh, Harmoni Ashley, and Riley Smith. On defense, Harmoni Ashley had seven outs on first base with assists from Brooke Jones, Arie Douglas, and Wilson. Douglas had four outs on second base and the outfield was defended by Shelbi Maxwell with four outs and Amber Brinson with three outs.

For the Lady Cougars, Fortenberry was the big hitter with a two-run double and single. Skyler Speights hit two singles and Josey Nahone, Sydney Pevey,Tyrnsha Davis, Julianna Johnson and Kaylie Ready hit a single each. On defense, Josey Nahone was the top defensive player for the Lady Cougars with four outs on second base.

Wesson will travel to Clinton tonight to face the Lady Arrows. The junior varsity game will begin at 5 p.m. and varsity play begins at 6 p.m.

The Brookhaven Academy Lady Cougars softball team finished 1-1 at the Parklane Tournament Saturday. They defeated Central Private 8-4 and lost to 4A Oak Forest 4-0.

In the victory over Central Private, BA was paced by two singles from Jana Case. Kailyn Jordan, Anna Grace Covington, Abeni Fuller, Emily Claire Felder and Madi Smith all registered singles. Felder got the win in the contest.

“We struggled early against Central Private but our bats finally woke up and we were able to put pressure on their defense,” BA head coach Becky Flowers said. “I also felt like we pitched well.”

Cameron Watson and Felder got the only hits for the Lady Cougars in a 4-0 loss to Oak Forest.

Flowers said she felt her team’s execution could have been better against Oak Forest, as they yielded four infield singles on the night.

“We didn’t execute some infield situations but I give their pitcher credit. She held us and kept our bats cooled down,” she said. “We hit several balls hard, just right at the defense.”

The second week of the high school football season was a tough one for teams in the area. Lincoln County... read more