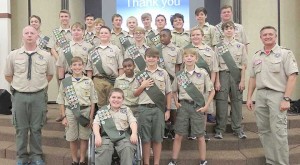 The great outdoors is full of adventure and learning, or at least that’s what the youth in Boy Scout Troop 119 and Venture Crew 119 believe.

“It goes back to just having fun,” Roberts said. “By being a part of these groups, they also pick up skills along the way.”

The two groups recently participated in a Court of Honor, a ceremony where the scouts are presented with their merit badges and rank advancements, at the First United Methodist Church of Brookhaven, Roberts said.

The 31-member Boy Scout Troop 119 earned 138 individual merit badges throughout last year and handed out eight rank advancements at the Court of Honor. 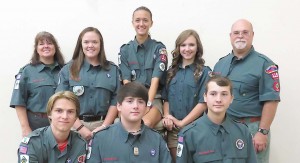 Venture Crew 119 was founded this year. It is a co-ed group for youth ages 14 to 21 who are interested in the great outdoors.

“That’s pretty high,” Roberts said of the number of merit badges awarded. “Most troops do not earn that many in a year.”

“They are so new, the Boy Scouts haven’t been able to do anything with them, other than the Court of Honor,” Roberts said. “We do look forward to being involved in activities together, like our winter camp.”

“The crew started out with six member and has already grown to 11 in less than a year,” Roberts said. “Venture Crew’s more in tune with high adventure things, like canoeing, water rafting and horseback riding. Their primary focus is outdoor fun and skills.”

Roberts said several of the Venture Crew members are former Boy Scouts who received their Eagle Scout rank, but aged out of the program. “Those boys wanted to continue scouting,” Roberts said. “Some of the other members were ladies who wanted to get involved in the outdoors.”

Boy Scout Troop 119 and Venture Crew 119 will participate in a winter camp during the winter holiday at Camp Warren E. Hood, Roberts said. The troop will then take a separate eight-day trip next summer.

“The troop will canoe the Lewis and Clark expedition down the Missouri River,” Roberts said. “The scouts choose their programs and build a plan to make the trips happen.”

Roberts said joining the Boy Scouts or Venture Crew provides students with fundamental skills to function in the real world.

“They pick up some outdoor skills, skills on how to interact, citizenship,” Roberts said. “How to be an active member of a community and contribute. They learn about volunteerism and how to put others before themselves. They learn respect. They learn leadership and followership, and to solve problems. But above all, they give glory to God.”

Photo submitted/Sophie (left) and Lilly Cupit, the 7-year-old twin daughters of Marlene and Malcolm Cupit, of Brookhaven, are learning about... read more