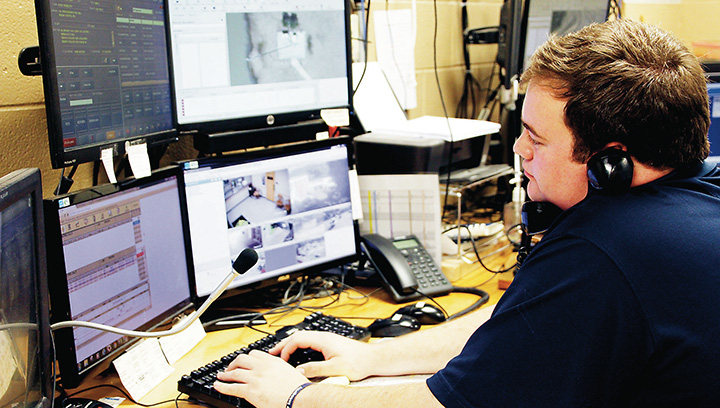 Lincoln County may seem small when compared to others in the state, but with all the small communities scattered throughout its 512 square miles, it’s a giant of a county to patrol.

The county’s top law enforcement officer doesn’t like to say it is ever quiet. But Friday when Sheriff Steve Rushing and his deputies patrolled the county, there were few serious calls.

Rushing rode out in his gray Dodge Durango patrolling from the Lawrence County line all the way back to the Jefferson County line, keeping an eye out for anything out of place.

“It might get slow, like today,” Rushing said. “But there is always something for my deputies and I to do.”

The sheriff’s department has 21 full-time employees, including Rushing, and 10 part-time and reserve deputies. He encourages all of his deputies to stay up-to-date on their training and asks them to be involved in the community.

“I usually have very little turnover in deputies,” Rushing said. “Everybody that comes usually likes to stay.”

As sheriff, Rushing takes his responsibilities to his native county seriously. With a $3 million budget — $ 2 million for the office and $1 million for the jail — he juggles a lot at once.

“I patrol, help with investigations, am in charge of dispatch, the jail, and have to handle certain court proceedings,” he said. 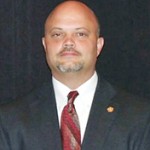 Rushing has supervisors over each area he manages to help with the day-to-day operations.

When an individual calls 911 in Lincoln County, the call will go through the sheriff’s office’s dispatch service.

The four answering stations are run by employees who work 12-hour rotating shifts.

“We take calls for the city and county, ambulance service and the fire departments,” Rushing said. “We’re at the highest phase — Phase 2 — for our dispatch system.”

“Phase 1 just basically gives you a tower location,” Magee said. “Phase 2 will give you the address and will actually take you to the location of the phone where the call is coming from.”

The information dispatchers receive is dependent on the cell phone carrier a person uses when calling 911.

“The carrier has to be updated as well,” Magee said. “But we are as updated as possible.”

On each 911 call, the dispatcher first asks where the person is, and then what the situation is.

“Our first question is where because if we get disconnected we know where to send a deputy,” she said.

On an average day, dispatchers receive a minimum of 100 calls for the sheriff’s office.

“That does not include all of the calls we receive for the ambulance service, the city or fire departments,” Rushing said. “All of the calls are recorded, so if we have to go back and check something, we can.”

When a call comes in for another entity, the dispatchers transfer the call, he said.

“That lasts for three years,” Magee said. “Before completing your third year, you have to complete 48 hours in six electives. After they do those 48 hours, the take a 16-hour recertification course.”

The Lincoln County Sheriff’s Office employs four investigators who work closely with the sheriff on felony and serious misdemeanor cases.

The investigators’ load covers a little bit of everything — shootings, child abuse cases, burglaries and forgeries, Rushing said. They usually work 40 to 50 cases a month. “They’re on call all the time, too. We don’t have divisions like you see on TV. They have to work them all.”

Investigators quickly solved a rash of house burglaries in the New Sight Community two weeks ago, he said.

Emanuel Williams, 29, of Hazlehurst, was charged with three counts of house burglary and one count of auto burglary in connection with the break-ins on New Sight Drive and Lott Smith Road. He was apprehended in Brookhaven where he’d been living.

All four of the investigators practically grew up in the Lincoln County Sheriff’s Office.

“A lot of us started on patrol together and moved up,” Rushing said.

By state law, Rushing is required to attend each meeting of the Lincoln County Board of Supervisors and most court proceedings.

“Two to three days of my week are taken up in court,” Rushing said.

He escorts inmates to and from the courtroom and helps investigators present evidence in a case.

The Lincoln County jail can hold 125 inmates, but there are usually between 80 and 90 held at all times, Rushing said.

Eighty-six inmates were in the jail Friday.

“Females are held downstairs, separate in their own cell block,” Rushing said. “Upstairs is where our males are held. We used to only have one or two females, now the cell stays about maxed at 10 beds. As far as the guys go, we usually stay about this population.”

Rushing said they try to divide the inmates based on their criminal history and their relationships on the street. “Different groups don’t get along so we try to keep them separate as much as we can,” he said.

The control room allows the jailer to watch each cell block, all of the hallways, the visitors’ area and the courthouse. The jailer watches for fights or suspicious activity, he said.

In addition to managing the jail, Rushing is in charge of the inmate work program in Lincoln County.

Inmates given an “A” classification by the state — meaning the person was incarcerated for a misdemeanor crime — can qualify for the work program.

Rushing has room for 20 in the program, but currently houses just 10.

“They benefit from the program because every day they work, they get one day off their sentence,” he said.

Inmates in the program work at the multi-purpose building, on supervisor crews and garbage crews and around the courthouse.

“I’ve added it up before, but if you were to hire the 10 work program inmates at minimum wage it would cost a lot,” he said. “It is a big savings for the county.”

With more than 512 square miles to cover within the county, the sheriff’s office does its best to respond to calls as fast as possible, Rushing said.

“We have really good response times, despite having to go through town on certain calls,” he said. “Most of my deputies try to find different ways to different spots in the county.”

Rushing typically has only four of his 21 deputies on shift at one time. Due to the 12-hour staggered shifts, the county has only three men working patrol during part of the day. If the call load is overly large, and the deputies on duty need help, Rushing said those who are off duty will lend a hand.

“They all take their cars home, so they can be called out if we need them,” he said. “They usually spread out to four sides of the county,” Rushing said. “They ride a patrol, looking for anything unusual.”

“They ride the school parking lots during the day,” he said.

The biggest part of each deputy’s day is responding to calls that come in to dispatch, Rushing said.

“The calls usually pertain to disturbances, domestic cases, thefts and property crimes,” he said. “But sometimes can be related to a murder or major assault.”

That was not the case Friday. 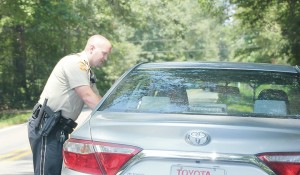 “Some days we are constantly running, but others are slower,” he said.

Smith, who has been a full-time deputy in Lincoln County since 2013, patrols the roads of Lincoln County during his shift, hoping to make his home a little safer.

During a traffic stop Friday, Smith pulled over a Toyota Camry for not having a tag. He explained what he does before pulling someone over.

“I will call in the license plate number to dispatch and find out as much as I can about the vehicle,” Smith said.

After flashing the blue lights and pulling the vehicle over, Smith radios his location into dispatch before exiting his patrol car in case something was to go wrong with the stop.

As he approaches the vehicle, Smith turns on his body voice recorder, which connects with the vehicle’s dash-mounted video camera.

When he asked the driver why the vehicle does not have a license plate, she pulled out paperwork explaining she had not received a tag yet because the vehicle had just been purchased.

Smith sends the driver on her way because she had all the correct documentation.

“I would normally ask for a driver’s license and insurance, and then come back to my car and run it,” Smith said. “But since she had already pulled out the documentation and only bought the vehicle three days ago, I didn’t.”

Once back inside the vehicle, Smith stopped his body voice recorder. He radioed his safe return to dispatch.

Last year, the sheriff’s office responded to approximately 11,000 calls, and is expected to reach that number again by the end of 2016.

“The county usually sees spurts of violence and high activity throughout the year,” Rushing said. “It has always kind of gone that way. I don’t think people have become more violent over the years. I think more people just report it now. Our job is to respond and help the best we can.”

New turf in the works for Stone Stadium

The football field at Copiah-Lincoln Community College’s Stone Stadium may soon get synthetic turf for the Wolves to prowl. The... read more