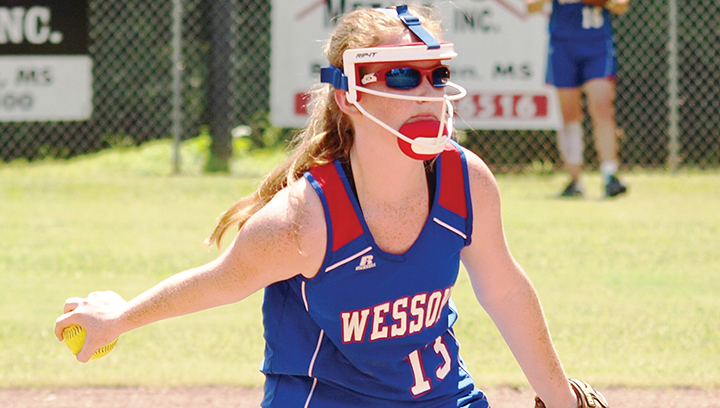 Photo by Tracy Fischer/Wesson Cobras’ starting pitcher Riley Smith delivers a pitch during a game earlier in the season. Smith plated the winning run against the Bulldogs in a 4-3 victory Tuesday.

The Wesson Lady Cobras hosted the Franklin County Lady Bulldogs Tuesday night for conference play and took a victory by  a score of 4-3 after trailing late in the contest.

“I’m very proud of my girls,” Wesson coach Michelle Nunnery said. “We played a very good Franklin County team that wasn’t going to lay down and die.  We kept battling and took care of business during that big sixth inning.”

The tough Lady Cobra fielders held the Lady Bulldogs,  and Smith sealed the deal with a double play from the pitcher’s mound to end the game. Smith, the winning pitcher, also struck out one batter.

Big hitters for Wesson were Brook Jones and Amber Brinson, who each brought in a run in the big victory. The ladies hit a homerun and single, respectively.

For the Lady Bulldogs, Kaytlyn Smith hit a two-run homerun to take an early lead in the game.

The junior varsity Lady Cobras also got a win over Franklin County with a final score of 7-1.  Winning pitcher Shaylin Green threw five strike outs in the game. Top hitters for the Cobras were Natalie Bonds with two doubles and a single. Green also had a double and a single. Katie Westbrook hit a triple and hitting safely were Alyssa Carraway, Molly Granger, Chloe McManus and Alexus Ashley. First baseman Laynee Crapps had four outs and Chloe McManus had two outs and two assists from third base. Alana Westrope had two outs in right center.

The Cobras’ varsity squad  will host Mendenhall Thursday at 6 p.m. The junior varsity game will begin at 5 p.m.