Fourth-ranked Co-Lin to take on Coahoma 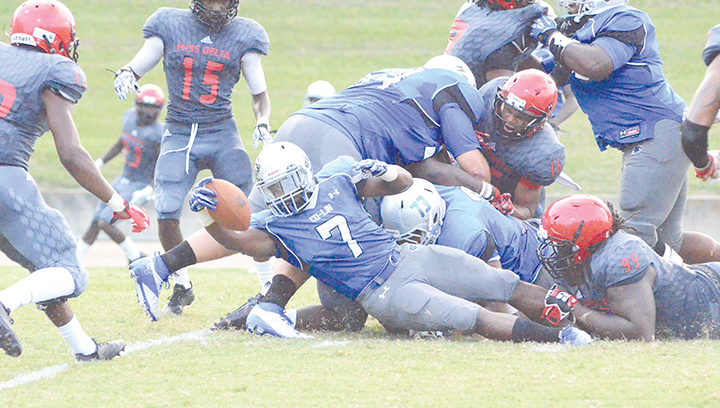 Photo by Anthony McDougle /Copiah-Lincoln starting running back Ladarius Galloway stretches into the endzone for one of his two scores in the Wolves’ 44-0 victory over MS Delta last week to open the season.

WESSON ­– The Copiah-Lincoln Community College Wolves climbed three spots in the national poll to No. 4 after a 44-0 victory in week one over Mississippi Delta.

Game two of the season will feature the Wolves hosting Coahoma Community College today at 7 p.m.

The Tigers come to Wesson after a 24-6 defeat at home in Clarksdale to Southwest. The Tigers’ defense forced the Southwest offense to turn the ball over four times in the loss. Three of those tunrovers were interceptions, with one being returned 38 yards for a score while the other was a forced fumble. Penalties proved costly for Coahoma, as they drew 18 for a total of 125 yards.

This will be the 21st meeting between these two schools, in which Co-Lin holds an impressive 18-2 record. Fans are asked to wear white, as the theme of the game is “White Out.” Watch the action live in HD at colinathletics.com or on the schools’ Facebook page. The game will also air on 104.3 FM.

Offensively, game one was an efficient outing for rookie quarterback Dominic DeLira who was able to connect on over 60% of is passes. DeLira threw for 167 yards and two scores. This included his first collegiate touchdown, a 12-yard screen to fellow Austin, Texas, native, Daytrin Guyton Jr. Sophomore DeAndre Barnes continued his success from 2015 as he snagged four passes for over 70 yards including a touchdown reception. Sophomore Ladarius Galloway led the way on the ground for the Wolves. The Gentry High School graduate averaged seven yards per carry finishing with 54 yards and two rushing touchdowns.

Co-Lin continued their defensive dominance as they held the Trojans’ offense to just 47 yards. Sophomore linebacker Colton Magee led the charge with eight tackles, four for a loss, and two sacks. Fellow sophomore linebacker Michael Graham capped off the Wolves’ stellar defensive play with a 28-yard interception return for a touchdown in the second quarter.

Overall, Co-Lin appeared balanced on both sides of the ball in week one and hopes to extend that level of play into game two. With solid play from the special teams all the way down to the offensive line, the No. 4 Wolves have high hopes for tonight.