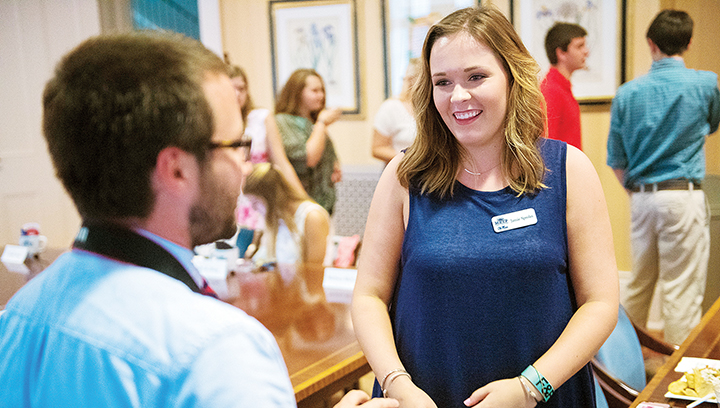 Photo submitted/Jamie Sproles, of Brookhaven, one of just 30 students enrolled in the freshman class of the Mississippi Excellence in Teaching Program at the University of Mississippi, recently met with faculty and administrators during the program’s orientation at the Lyceum.

Not only is the 18-year-old from Brookhaven one of only 30 students enrolled in the freshman class of the Mississippi Excellence in Teaching Program at the University of Mississippi, but she’s also in the Ole Miss Honors College and the Trent Lott Leadership Institute. She’s taking 17 hours of classes toward her double major in secondary English education and public policy leadership and if that’s not enough, she’s holding down a job, too.

Sproles is on a youth council through Mississippi First, working on policy issues concerning sex education which requires online research and conference calls with a few trips to Washington, D.C., to lobby legislators thrown in for good measure.

She’s working for the experience, not the paycheck, since the Mississippi Excellence in Teaching program gave her a full ride to Ole Miss, as long as she agreed to teach in Mississippi for at least five years.

That’s not a problem, said Sproles, the daughter of Tommy and JoAnna Sproles, of Brookhaven, though she plans to defer that agreement for a few years after graduation so she can pursue her master’s and doctorate degrees. She’ll need those to reach her eventual goal of becoming a school superintendent.

That’s a pretty lofty goal for a teenager, but as the child of educators, it’s one that didn’t come as a surprise, she said.

Her mother, an LSU alumni, is an interventionist at Brookhaven High School. Her father, who went to Southern Miss, teaches at McComb High School.

Sproles said her schedule sounds like she has a full plate, but it’s not as bad as it seems.

“It’s not a rigorous schedule. I’m not overwhelmed,” she said. “Most of the classes are low maintenance.”

There’s also the matter of subjects. “There’s not a lot of science or math in it right now,” she said. “I just need six hours (of math) and I took college algebra in high school and I’m taking statistics now.”

Sproles is living on campus in a dorm and plans to enjoy all that Ole Miss has to offer the wide-eyed freshman.

“All the academic opportunities are there, but I’m not going to miss out on the student life here,” she said. “I’m going to make some fun decisions.”

One of those will be the first home football game. She’s looking forward to tailgating in The Grove.

“I’ll be at the Brookhaven tent. They’ll have food and stuff,” she said. “A few other friends have families that tailgate. I’ll be making the rounds.”

Sproles said while she plans to make time for fun, she will also be focusing on her grades. The full scholarship makes that possible.

“It’s such a huge blessing,” she said. “All the reason I’m here is because I’m on this full scholarship, so I need to dedicate a lot of my time to my grades,” she said.

The goal of the program is to make leaders, and Sproles said she hopes to eventually be a great one, “to not just go to class and make the grades but to also set an example.”

Sproles will start observing classroom behavior for an hour a week in Oxford starting next week.

The METP was established in 2012 with nearly $13 million from the Hearin Foundation. The scholarship covers up to four years of tuition, housing, living expenses, study abroad and more.

“There is no other program like this in the nation,” UM Dean of Education David Rock told Sproles and the other 29 students at their orientation. “You are going to be challenged and start gaining experience in the classroom from freshman year.

“You will travel outside Mississippi and beyond the borders of our nation to learn how education is different across the world. We do all of this because we believe you can choose no greater profession than teaching.”

METP held its first study abroad experience for seniors last June when it took UM students to different places in British Columbia and Alberta, Canada. During the trip, METP students and faculty had chances to meet with educators in multiple Canadian schools and at the University of British Columbia.

For the past two years, the program has also taken its rising juniors on a trip to Washington, D.C., to study American education from a policy perspective, as well.

A man who lives on Jake’s Trail begged the Lincoln County Board of Supervisors to do something about the poor... read more