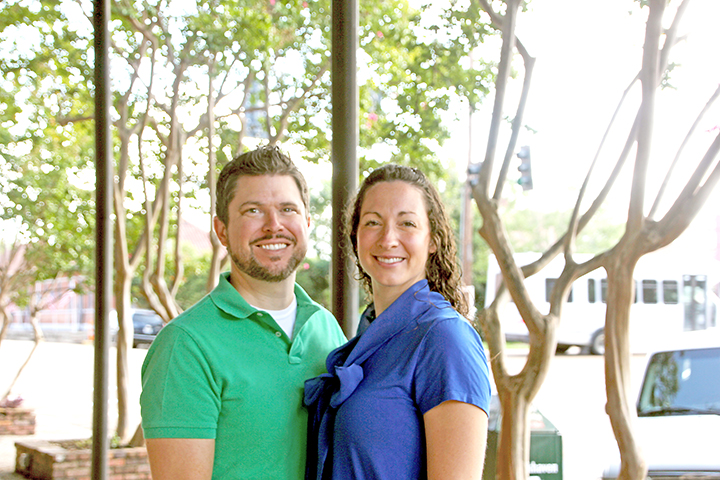 Photo by Alex Jacks/Brookhaven native Brent Leggett and his wife Linnea Stonecypher have moved to Leggett’s hometown so they can both practice medicine. Leggett, the son of Dr. Hugh Leggett, is an orthodontist who will be joining his father’s practice. Stonecypher, who has dual citizenship in Canada and the U.S., is an optometrist who plans to start work in October.

Brookhaven’s ability to provide top medical care to its residents grew in July when native Brent Leggett and his wife, Linnea Stonecypher, moved back to Lincoln County.

Leggett, the son of Dr. Hugh Leggett, is an orthodontist and has recently joined his father’s 38-year-old practice.

“I think my father has created a legacy here, and I definitely want to continue that and provide great quality orthodontic work,” Leggett said.

Stonecypher, originally from Canada, is an optometrist and hopes to begin practicing in Brookhaven in October.

“I’ve been practicing for seven years,” she said. “My plan right now is to find somebody to work with in the area and see where it goes from there.”

Leggett and Stonecypher both agreed that their move back to Brookhaven was the best thing for their careers and family.

“We wanted to be closer to family, and this is a great opportunity here for both of us,” Leggett said. “My dad’s already an established orthodontist here, so going into practice with him is probably the best combination you can get.”

The couple met while attending Southern Adventist University, just outside of Chattanooga, Tennessee, but parted ways for several years while they each attained their higher degrees.

“We both completed our undergrad there,” Leggett said. “From there, I went to Loma Linda University in Loma Linda, California for dental school.”

While Leggett was in California, Stonecypher began her life in Oregon, attending Pacific University in Forest Grove for optometry school.

“The last year of optometry school, I got to go to multiple different areas — Alaska, Guam, Oregon and Washington,” Stoncypher said. “When I graduated, I went back to Canada and took my Canadian boards.”

In Canada, she worked for a corneal specialist for a little over a year, and then a primary care optometrist for a year in Kelowna, British Columbia, Canada.

After graduating from dental school, Leggett moved to Oregon to run two offices, part of a large dental group.

“One of my classmate’s family had a big dental group in Oregon,” he said. “It was great working there, getting on my feet as a new general dentist.”

With two years under his belt, Leggett then decided he wanted to move back to the South and took a job as an associate dentist for a cosmetic dentist in Tennessee.

“I really enjoyed that, but about a year into it is when the Great Recession hit,” Leggett said. “The practice struggled at that point, so I decided to move down to Pensacola, Florida.”

He worked as a general dentist at the naval air station  for four years before deciding to move back to Loma Linda to pursue his orthodontics certification. Four months before moving, however, he married Stonecypher.

“While I was in Pensacola, we reconnected on Facebook,” Leggett said.

“I was still in Canada when we were reconnecting,” Stonecypher added. “We did long distance for 10 months before I moved to Spanish Fort, Alabama, to practice. I’m a dual citizen. It was much easier for me to move down than him to move up.”

Leggett completed a two and a half year orthodontic residency, while Stonecypher worked for an ophthalmologist in California.

The two made the move to Brookhaven in July and are looking forward to staying and providing their fellow Lincoln Countians with the best care possible.

“Because I’ve gotten to experience several different dental practices and orthodontics in general, I’ve learned quite a bit about different philosophies,” Leggett said. “I’ve got all that to bring to the table. I’ve got a lot of tools in my toolbox.”

Stonecypher said she is just excited to have a place to call home.

“It’s exciting to make changes,” she said. “But it can be exhausting. We are excited to settle down and put down some roots.”

The couple wants to work with a few worthwhile organizations in Brookhaven.

“We both want to get involved now that we’re getting settled in here,” Leggett said.

“Specifically, mentoring students,” Stonecypher continued. “I think that’s something that we both hold near and dear. I know that in all of the practices I’ve worked in, I’ve had students come and observe and shadow. That’s been a lot of fun. I’ve really like doing that.”

When they are not serving their community, the couple can be found doing some type of outdoor activity like hiking, mountain biking and dirt biking.