Alexander Junior High students on a quest to learn 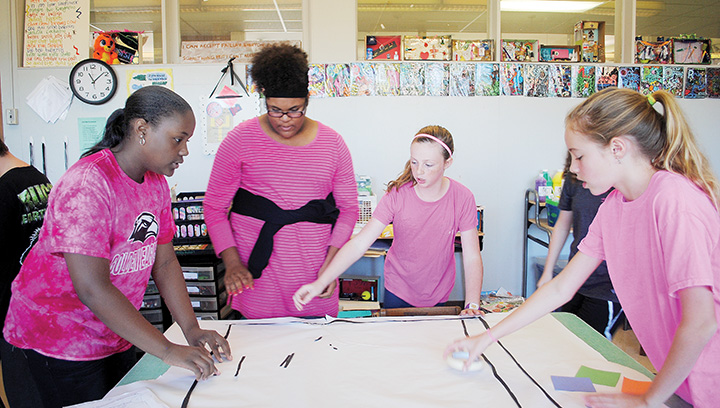 Photo by Aaron Paden/Cassidy Robinson (left), Kaylin Redd, Merritt Wolfe and Ellie Slay, seventh grade students at Alexander Junior High, recently worked together to design and build a costume for Quest’s annual Halloween competition. Time and supplies were limited, and students had work together to finish their costume.

It wasn’t your typical Halloween contest.

Seventh grade Quest students at Alexander Junior High spent their class period Friday designing and constructing Halloween costumes — but there was a catch.

Students had one period to design and build the costume, and supplies were seriously limited. The seventh-graders had only 5 feet of white paper, two sheets of construction paper and masking tape to work with.

They had each other as well. If any student wasn’t participating, the whole group could be disqualified. It was a fun exercise that engaged the students, but there was more involved than just fun.

“Remember,” teacher Vickie Driskell reminded one group of students who had begun to talk animatedly to one another. “It isn’t effective unless you talk one at a time.”

It was an engaging exercise and students were having fun, but Driskell said there was real learning going on as well. The exercise is designed to teach students in the areas of evaluation skills, leadership, communication, group dynamics and critical thinking.

Quest is a program designed for intellectually gifted students, and students are given an assessment to see if they qualify for the class. Each district in Mississippi is required to provide the course for sixth through eighth grades, but Brookhaven is one of only about 10 districts in the state to have Quest programs for seventh- and eighth-graders.

Driskell has 55 students, but she never has more than 12 students in one class, as mandated by state law.

“Most of the instruction is individualized and students can investigate things they’re interested in,” she said. “They can grow at their own levels and investigate their own interests.”

There are plenty of opportunities for them to do that. Students can learn programming at code.org, and projects include reproducing masterpieces with mathematical precision and even architecture.

“They do house plans and develop a fictional client,” Driskell said. “It takes about nine weeks to build a portfolio and get all the skills completed.”

Driskell has been teaching Quest for 15 years. She said she was drawn to the program because she would be able to teach each child individually and take topics of learning as far as the children would like.

A Lincoln County grand jury found enough evidence in cases it heard recently to establish the commission of a crime... read more