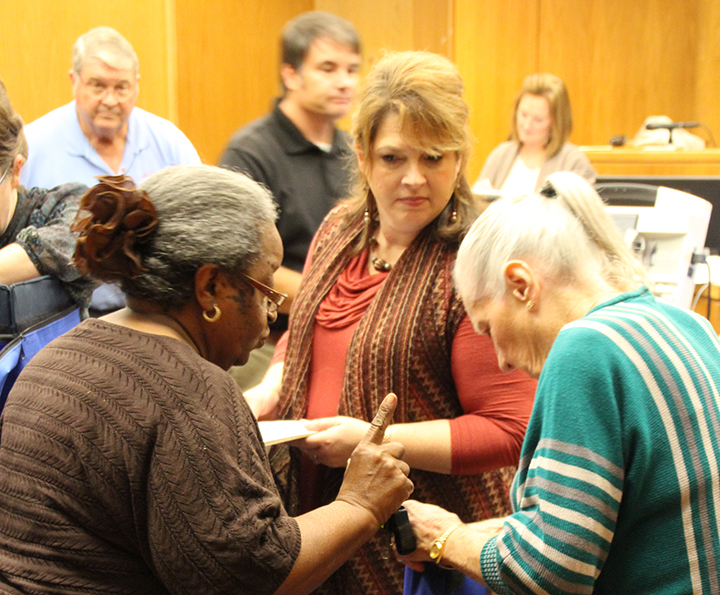 The 31 precincts in the county saw 14,812 of those voters Tuesday. Bairfield said 384 of them cast an affidavit ballot.

“Those were people who were listed as inactive,” he said. “That means that when they went to vote, their name did not show up. When the precinct called our office, we would tell them to let them vote on paper or as an affidavit. They all filled out the outside of the envelope and we will correct their information. They will be getting a new voter registration card mailed out.”

Seven affidavit ballots were set aside and not counted Tuesday, for lack of identification, Bairfield said.

“There’s seven that we have to hold for people to come to my office to show a photo ID,” he said. “They did not have a proper photo ID when they cast their ballot. If they don’t come here to show their photo ID, then those ballots will never be opened or counted.”

“Votes on the machines were extremely high,” he said. “They are all up. A county election, usually ends up somewhere between 10,000 and 11,000. Well, we have over 13,000 just on the machines. We usually average around 51 percent turnout.”

Republican Gregg Harper stole the show for the 3rd Congressional District vote in Lincoln County, with 71.45 percent. Democrat Dennis C. Quinn received 25.87 percent of the vote in the county.

All votes — absentee, affidavit and in person — were counted Tuesday night.

“Most counties don’t tally all of the votes the night of,” Bairfield said. “I like to get it done though, because everyone wants to know the results.”

“We have to wait to see if anybody is going to come in for the seven photo IDs. If they do, then we can add those votes to the totals. The election commissioners will come in and certify the election that Wednesday,” he said.

Bairfield reported no problems during Tuesday’s election, but cited several upgrades he would like to make for future elections.

“Overall, the hardware, the election itself was very, very smooth,” he said. “What we did learn from this election, since it was such a high turnout, is that we’re going to try to update our voter poll books, the electronic poll books.”

The goal for updating the poll books would be to allow the names of inactive voters to show up in each precinct’s book, Bairfield said. This would avoid the large number of affidavit ballots, he said.

“That’s something we’re going to try to change in the future, just to make it smoother for the voter,” he said. “The main thing, at the end of the day, is we try to make sure every vote counts.”