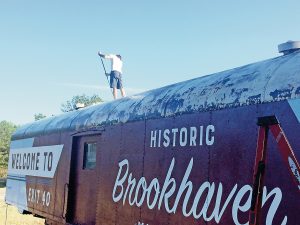 Photo submitted/The Brookhaven-Lincoln County Chamber of Commerce tourism council spent a year working toward transforming an old train car into a welcome sign for interstate travelers. A company was hired to pressure wash, prime, hand paint and clear coat the design to the train car.

A Brookhaven landmark has been revamped to greet those entering the city.

The train car, located on the southbound side of I-55 before exit 42, has been a landmark to many Brookhavenites for as long as they can remember.

“As I understand it, several tourism board members that have served long term has said the idea of fixing up the train car has floated around the community for 15 or 20 years,” Chamber Executive Director Garrick Combs said.

The train car sits at a prime location to be seen by people traveling south, he said.

“A number of different entities tried to get started on the project over the years, but it wasn’t until about a year ago, that the process really kicked off,” Combs said.

It took approximately a year for the tourism council to get permission from the landowner and Mississippi Department of Transportation to use the train car as a sign, and come up with the funds to do it, Chamber Program Director Katie Nations said.

“The land the train car sits on is privately owned,” Nations said.

“We were able to work out a deal with the land owner to lease the property for $1 a year,” Combs said. “She was very cooperative. I can’t say enough about that and her help.”

Getting the train car design approved by MDOT took the most time, Combs said.

“Rep. Becky Currie helped us tremendously by getting the train car logo and design approved by the correct MDOT officials,” he said. “Once the design was accepted, our marketing company, Raborn Media, did a lot of the work. They searched across the state for a company that could actually put the design on the car.”

The company pressure washed it, primed it, hand painted it and then clear coated it, Nations said.

“It should last seven to 10 years before we have to do anything to it,” Combs said.

Nations said the tourism council plans to have lights set to illuminate the train car at night so it can be seen 24 hours a day.

“I think being a native Brookhavenite, you’ve always noticed it,” Nations said. “We wanted to bring it back to life, but stay true to its original character, while still attracting people to our town. We want people to get off at the exit, to stop, eat and shop.”

“It surprised me how much went into carrying it out,” Combs added. “We’re real proud of it. It took a lot of work by a lot of different people.”

Brookhaven Little Theatre presents ‘A Christmas Carol’ at The Haven