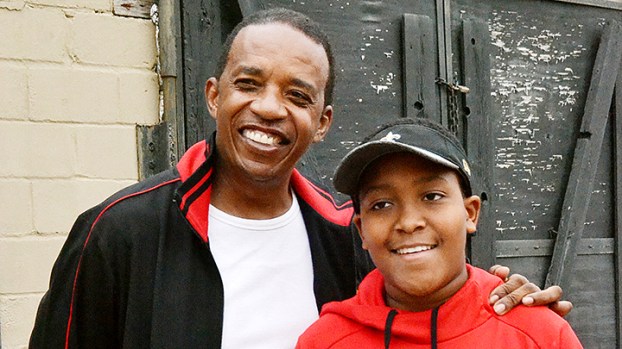 Photo by Donna Campbell/Tyrone Porter (left) says family members like his grandson, Lamareo, have been his rock while he’s had cancer.

Cancer won’t win, but God will

You never know the power of God until a storm hits you.

Tyrone Porter, a 60-year-old self-employed bricklayer, has been struggling with kidney cancer for two years. He lost his right kidney in January 2014, and doctors later found spots on his left kidney.

“I was told that I would have to be on dialysis until I got a second opinion,” Porter said.

His surgery at the M.D. Anderson Cancer Center in Houston, Texas went well, but he had internal bleeding once he returned to his Lincoln County home that same night. “I was rushed to the hospital in Jackson. The pain was unbearable; I had never experienced anything like that, but God was still walking with me,” he said.

Porter is a child of God who has been serving other people all of his life. He has received much support since his cancer discovery from the hearts of people he never realized he had an impact on, he said.

“In Jackson, the doctor told me that I would not be able to leave because I was unstable. I wanted to get back to Houston to see the doctor who did the surgery I was having complications with,” he said.

He did not have enough insurance available to cover his expenses to get back to Houston, but he knew that was the right place for him. After making a few calls, he received help from his friends: attorney Brady Kellems, Bernie Reed of Reed’s Metals and Paul Barnett of Paul Barnett Nissan. Kellems told him to sign the release form from the hospital while Reed sent him a private jet to Jackson with Barnett as the pilot to take him back to Houston.

Before leaving Jackson, Porter had to get five pints of blood, and he needed a nurse to assist him as he traveled to Houston. “Reed made a Facebook post asking for registered nurses to travel with me. Within minutes, he received responses from about 50 nurses willing to travel with me. None of the nurses asked for any money to do so either, and I know that was nothing but God doing all of this for me,” he said.

People have continued to come back in Porter’s life to help him in time of need just like he did for them when he was healthier. “Just the other day, I had a friend of mine call me that has a television network in Chicago,” he said. Hoyett Owens, co-owner of OwensMorris Communications, agreed to pay for his medical insurance until he got back on his feet.

Porter is amazed by all of the support he has received from his friends and family. One of his grandsons, 12-year-old Lamareo Porter, visits him daily to assist him in whatever he needs. Porter will find out if he needs to have any more surgery on his left kidney Jan. 10.

“I worry about my condition, but I thank God because it’s going to make me a stronger brother. I can’t wait to get on my feet to be a greater giver,” he said. “There were times when I was well and did not keep cancer people in my prayers until I went to Houston and was praying for people all throughout that hospital that was in worse shape than I was.”

Porter has learned how to embrace the battles in life. He said he is at peace knowing that God will either continue to fight this battle with him, or he will put him to rest. “You got to make sure you don’t carry doubt. You got to keep the hope and know that God is still in control. I feel that I got more work to do and can understand situations better now than I ever could,” he said.

Ward 4 Alderman Shirley Estes: I was wrong about the meeting

Shirley Estes can admit when she’s wrong. The Ward 4 Brookhaven alderman said she made a mistake and is making... read more