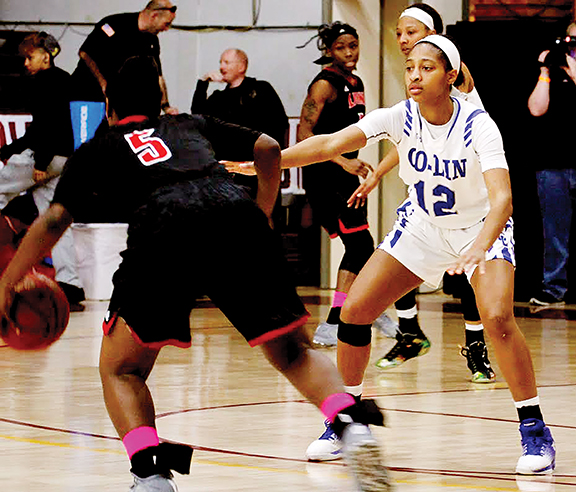 Freshman Alexus Holt, an Epps, Louisiana native, led Co-Lin with 14 points in their 53-50 loss to Southwest Thursday afternoon in the MACJC semifinals. (Photo by Lucas Calvert)

ELLISVILLE — The Copiah-Lincoln Lady Wolves fell to Southwest 53-50 Wednesday afternoon in the semifinals of the MACJC State Tournament.

The tough loss moves the Lady Wolves to 20-4 on the season heading into to the Region XXIII Tournament next week. The tournament begins Tuesday on the campus of Mississippi College, but a game time has not been determined.

Action was back-and-forth in the opening quarter as both teams played extremely physically. Co-Lin’s Diamond Smith drove to the basket in the final seconds of the quarter to give the Lady Wolves a 13-12 lead going into the second quarter.

Teams relied heavily on second chance basket on the offensive end of the floor. Co-Lin held the Lady Bears to just eight points in the quarter, yet only scored 11 of their own. Co-Lin took a 24-20 lead into the locker room.

The defensive play continued in the third as both teams traded few baskets. At the end of the third Co-Lin led 37-29.

Southwest was forced to foul and Co-Lin knocked down one free throw to stretch the lead to 50-48. The Lady Bears hit a go ahead three-pointer with just 18.5 seconds left in the contest. Co-Lin lost the ball on the next possession with a jump ball and the game was pulled out of reach.

“When you don’t execute, I’ve been talking about all year long, and allow their best shooter a wide open three…just terrible coaching and playing,” said head coach Gwyn Young. “We couldn’t finish on offense when we had the ball right under the basket, this loss is our fault and it’s just disappointing.”

Alexus Holt led Co-Lin with 14 points and 4 assists in the game. Brittany Rose, Karry Callahan, and Diamond Smith all finished with 10 points each. Smith also led the Lady Wolves with 11 rebounds, while Tenazhia Hinkson and Callahan brought down eight.

West Lincoln baseball off to 3-0 start

With the young season just under two weeks old, there’s promise for West Lincoln, as the Bears have impressed early,... read more