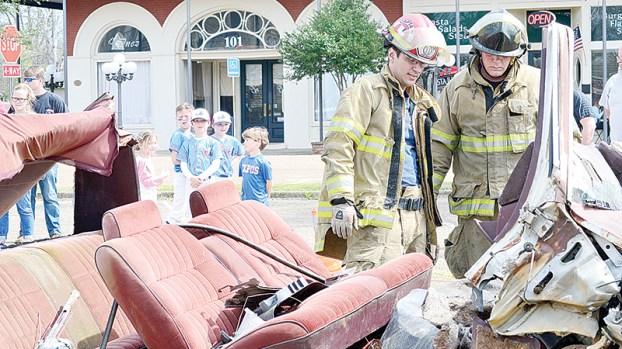 BFD captain on fire for serving

This preacher’s kid is all about putting out fires in Brookhaven.

But it wasn’t always that way.

He hadn’t planned on becoming a fire fighter until divine intervention by some members of his father’s congregation pointed him in the right direction.

Capt. Aaron Welch was a new kid in Brookhaven, just 12 years old and attending New Prospect Baptist Church after his father took over as pastor. That’s when he met the fire fighters who would change his life.

“My dad preaches there, and a group of four or five firefighters were at the church,” Welch said. “I grew up around (retired chief deputy) Bob Watts.”

Welch graduated from West Lincoln Attendance Center in 2002 and Watts hired him a few years later. He’s been with the Brookhaven Fire Department for 12 years.

Welch, 33, lives in Brookhaven with his wife Hayley and their two children, Laila and Riley.

This past weekend, Welch led his crew through two successful training demonstrations at the “Goin’ to Town” car show. In both, he and his men used hydraulic machinery to rip a car apart to rescue the driver, a blonde dummy used for training.

“The way we cut that car during our dummy presentation is not how we’d usually do it because sometimes we only need to take off the car door,” he said. “However, the dash could be rolled in on someone’s leg, which requires us to cut the roof.”

Knowing which technique to use requires frequent training.

“Popping a door is pretty simple,” Welch said. “But if you got a car that’s upside down, you got to reach a little deeper into your tool box.”

Welch said making the cuts around victims and emergency personnel can be tricky and dangerous. “Paramedics are usually in the vehicle with the patient as well,” he said.

He recalls an accident a few years ago. He was able to free a man from a mangled vehicle with the help of some off-duty fire fighters.

“About a week or so later we were in town and the guy thanked us. That was my first time meeting someone we got out of the car,” Welch said. “We get a lot of people that come to the fire department and thank us, but it’s rare to meet someone who actually recognizes you, and that was a big highlight for me.”

Waste Pro representatives appeared before the Lincoln County Board of Supervisors again Monday to answer complaints of missed stops on... read more