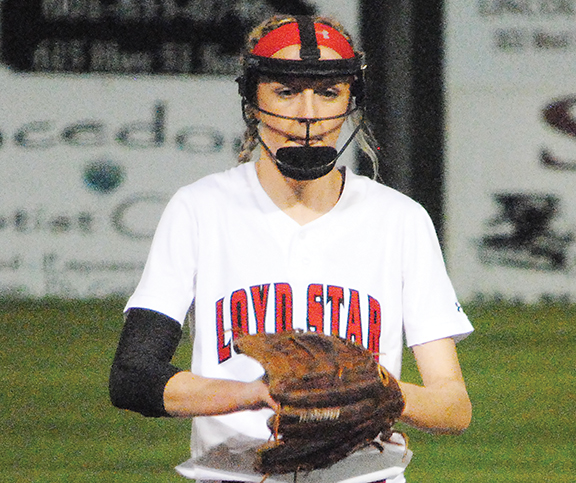 At left: Makenzie Smith leads Loyd Star with a .455 batting average and an ERA of 0.61 as a starting pitcher. (File photo)

The fast pitch softball season is in full gear as the schools in Lincoln and Copiah counties look to make early statements in the young season.

Three of the six teams playing fast pitch softball own an above .500 record with many more games to prove themselves the rest of the season.

One team stands out above the rest as the Loyd Star Lady Hornets have jumped out to a perfect 4-0 record.

The Loyd Star Lady Hornets have dominated the competition early in the season with a 4-0 record, including wins over Brookhaven and Lawrence County.

The Lady Hornets have outscored opponents 26-8 so far this season with dominant pitching leading the way.

Senior Makenzie Smith leads the way on the mound and at the plate for the Lady Hornets. Smith leads the team with a .455 batting average and six RBI so far on the season. Smith has been even more commanding as a pitcher. Smith has started all four games for Loyd Star and owns a 0.61 ERA over 23 innings pitched, giving up only two earned runs with 29 strikeouts on the season.

The team as a whole is batting .237 on the season. The pitching has been stellar so far, but the rest of the offense will need to step their game up to continue this hot run.

The next best team in the area has been the Wesson Lady Cobras. The Lady Cobras are off to a 4-1 start with their sole loss coming to Warren Central by a score of 3-2.

Other than the one blemish on their resume, the Lady Cobras have owned their opponents by outscoring them 37-6 on the season.

Wesson pitched two shutouts on the season and the most runs they’ve given up in a game was three in their loss to Warren Central.

Wesson and Loyd Star will face off Friday night at Wesson, so we’ll find out a lot about these two teams.

It was a rough start for the Bogue Chitto Lady Cats as they started 0-3 on the 2017 campaign, getting outscored 15-1 in those games.

The Lady Cats bounced back quickly, defeating West Lincoln and Vicksburg in their two latest games by a combined score of 19-2 to move to 2-3 overall.

Sophomore Karly Leake and junior Reagan Kirkland lead the team with four RBI each, but senior Cherie Savoie has been the leader in the Lady Cats lineup. Savoie is batting a .467 average with seven hits and two RBI so far.

Freshman Codi Leggett has started all five games for Bogue Chitto with a 2-3 record to show for it. Leggett has given up five earned runs, given up 14 walks and striking out 38 batters on the young season.

The Lady Cats have shown promise, but will need better pitching to win more games.

It’s been an up and down start for the Brookhaven Lady Panthers with a 2-2 overall record to show for it.

The Lady Panthers have split their two games against Lincoln County foes with a win over West Lincoln and a loss to Loyd Star.

Senior Macy Ziskin has been the bright spot in the lineup for the Lady Panthers. She’s batting a team-high .667 so far and also leads the team with eight hits and nine RBI on the year.

The starting pitching has struggled at times with a team ERA of 3.37. If the pitching can improve, the Lady Panthers will be just fine as the season moves along.

The Enterprise Lady Jackets started the 2017 season hot with shutout wins over Bogue Chitto and Salem to start out 2-0.

Things changed quickly as Enterprise dropped their next three games by a combined score of 31-3, including losses to Harrison Central and St. Patrick.

Needless to say, the pitching and hitting have greatly struggled during their three-game losing streak.

The Lady Jackets will look to turn things around quickly as they face Salem tonight and district opponent Bogue Chitto Saturday afternoon.

The West Lincoln Lady Bears have had some tough wins and losses in their 3-2 start to the 2017 season.

West Lincoln split their two meetings with Bogue Chitto and fell to Brookhaven on Feb. 28 by a score of 8-3.

The Lady Bears have shown potential in every game they’ve played in, but the key will be to stay consistent in order to rack up wins and place themselves as a serious threat.

Southwest Community College commit Makennah Redd has been dominant at the plate to lead the Lady Bears. The senior is tied for the team lead with a .471 batting average, with eight hits and four RBI on the season as well.

What’s been the most impressive about West Lincoln so far is the pitching staff, which owns a collective 1.44 ERA this season. The combination of sophomores Megan Gerald and Adi Paden have led a strong staff.

If the pitching keeps up, the Lady Bears could be one of the best teams in the area.