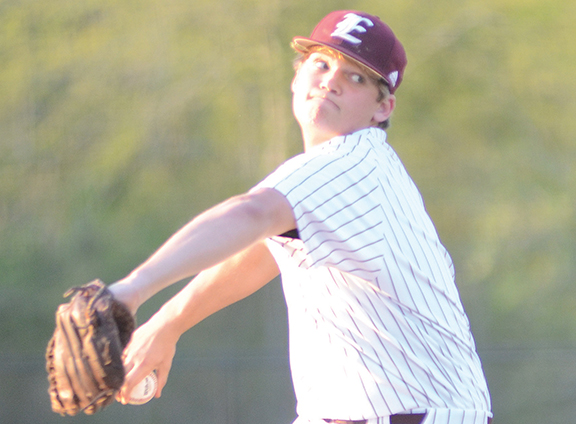 Landon Gartman of Enterprise winds up to pitch in a game played last season. (File photo)

The Jackets jumped out ahead early and scored eight runs in the top of the first and the offense carried them the rest of the way. Enterprise followed by scoring six runs in the second and five runs in the third.

The mercy rule was put in place as Enterprise took the district win by a score of 19-1.

Senior Trevor Freeman led the Jackets at the plate, going 1-for-3 with three RBIs for the game. 13 players recorded a hit and 10 players drove in a run as well.

Enterprise scored 15 of their 16 runs in the first inning and pitched a one-hit shutout on their way to the commanding 16-0 victory to sweep the doubleheader.

The two wins move Enterprise to 6-2 on the season and 2-0 in district play.

Junior Tanner Waldrop led the Jackets at the plate, going 2-for-2 with three RBIs to lead the scoring attack. Seniors Brady Williams and Jeffery Daniels each had two RBIs to help the scoring for Enterprise.

Freshman Austin Fugler picked up the win on the mound for the Yellow Jackets. Fulger threw two shutout innings, giving up one hit and striking out five batters in the process.

“I thought we played well. We pitched and played defense well,” Enterprise head coach Cass Brister said. “When you do that, most of the time you re successful. We still have a lot to clean up, but this is a good start.”

The Panthers picked up their first win of the season Wednesday night by shutting out Bogue Chitto 11-0. Errors in... read more