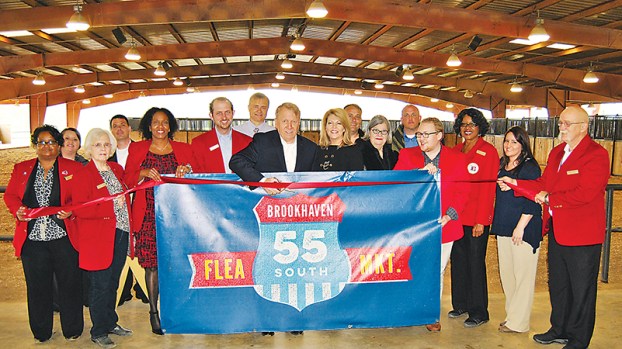 Photo submitted/Surrounded by supporters, owner Patrick Nelson cuts the ribbon at the pavilion that will house the Brookhaven 55 South Flea Market.

A Brookhaven native is offering deals and steals — and puppies — at the Brookhaven Flea Market.

Officially it’s called Brookhaven 55 South Flea Market, but most people are going with the shortened version of the name, said owner Patrick Nelson.

More than 70 vendors are expected at the inaugural weekend of the flea market, which will be located next door to the Lincoln County Civic Center baseball complex.

Commissioner of Agriculture Cindy Hyde-Smith, of Brookhaven, will be the first “celebrity” to ring the official flea market farm bell at 9 a.m. Saturday. Nelson plans to hand over the bell-ringing duties to a well-known Brookhaven person each month.

He’ll also be handing over 10 percent of his profits each month to a non-profit organization. This weekend it will go to Brookhaven Animal Rescue League. They’ll have two booths filled with adoptable pets, he said.

Other booths at the open-air pavilion will be filled with vendors offering handmade and quality manufactured items for sale. A concession area will also be available.

Nelson was born in Brookhaven, but grew up in Monticello before traveling the country — and Australia — for 38 years with Entergy. He’s living in Jackson for now, but is in Brookhaven so much that he’s started attending First United Methodist Church. He expects he’ll make the move home soon.

Nelson mentioned to someone in passing that there wasn’t a big flea market in Southwest Mississippi like he’d seen in other areas. His friends challenged him to do something about it.

He met with Quinn Jordan at Lincoln Civic Center to look at the building and knew it was perfect for his needs. “We walked in and fell in love with it,” he said.

It’s open air, but with a roof with a 30 foot overhang on all sides which will help protect vendors from wind and rain. He said the building has tall ceilings and large, clean restrooms.

The floor is partially concrete with some areas covered by wood shavings.

He has room for 100 vendors each month, but he plans to save five to 10 booths each month to offer to non-profits free of charge. “It’s just the way I was brought up,” he said. “It’s what my mom and dad would want me to do.”

In April, he’ll share 10 percent of the profits with Second Chance Mississippi, an organization that helps adult receive their GED. In May, he’s giving to Blessings in a Backpack.

Nelson hopes to attract quality vendors, not just folks cleaning out their closets. “That’s OK if they want to come one month and do that,” he said. “But we’re not looking for people who sell garage sale finds.”

He’s looking for artisans who want to sell their homemade foods and handmade furniture, antiques and unique items, Amish merchandise, fresh seasonal produce and bedding plants. The possibilities are endless, he said.

Concessions will also be available and Nelson promised that roasted corn will be available when it’s in season. He’s working on a menu of regular flea market fare with “some things that you don’t find anywhere else,” he said.

The Brookhaven Flea Market is set from March through December on the third weekend of each month except for April. It will be on the second weekend that month — April 8-9 — to avoid opening on Easter.

Some of his vendors that month will have Easter items for sale, he said, so it made more sense to offer it the weekend before Easter.

The Daily Leader asked the question: Should the public have access to salary and pay information on government employees? Whether... read more