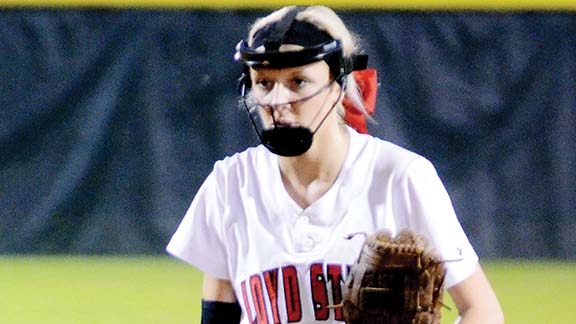 Makenzie Smith of Loyd Star (17) steps to the mound in their 3-1 win over West Lincoln Tuesday night. Smith finished the game pitching all seven innings, giving up one unearned run on two hits and striking out 12. (Photo by Dylan Rubino)

It was a pitchers’ duel from start to finish between the two Lincoln County schools Tuesday, but Loyd Star senior Makenzie Smith got the best of West Lincoln on the mound and at the plate, leading her team to the 3-1 victory.

The win keeps the Lady Hornets undefeated on the season at 12-0 and gives them their first district win of the season, something that means a lot to head coach Jan Delaughter. The loss drops West Lincoln to 5-3 on the season.

Smith pitched another great game for the Lady Hornets. Smith went the complete seven innings, giving up one unearned run on two hits and striking out 12 batters in a dominant effort.

“She really did a lot tonight. She’s a really good player and she showed it tonight,” Delaughter said of Smith. “Her pitching was great and we came out hitting to add on to it.”

West Lincoln fought hard the entire game and almost tied the game in the top of the fifth inning. With runners on second and third and no outs for the Lady Bears, Smith got the first batter to pop out and struck out the next two batters to get out of the jam.

The offense for Loyd Star played a great game with nine hits on the night and three runs to show for it on the scoreboard.

The Lady Bears would threaten again in the bottom of the fifth. Madison McNatt would score on a wild throw to first base and scored from second to cut the deficit to 3-1.

Marley Poole hit an RBI double to right field in the top of the sixth inning to seal the victory for Loyd Star at 3-1.

Smith, Norman and Poole all had multiple hits for the Lady Hornets with two each with each driving in a run apiece.

Sophomore Adi Paden was the starting pitcher for West Lincoln. She pitched two and two-thirds innings, giving two runs on seven hits and struck out one batter.

McNatt and senior Anna Brooke Davis each had a hit for the Lady Bears.

Next up for Loyd Star is a road game against Bogue Chitto Friday night. First pitch is set for 6:15 p.m.

Next for West Lincoln is a road game at Enterprise Thursday night. First pitch is set for 6:15 p.m.

The Co-Lin golf team rallied on day three of the Ron Marshall Spring Fling to finish in third place, the... read more