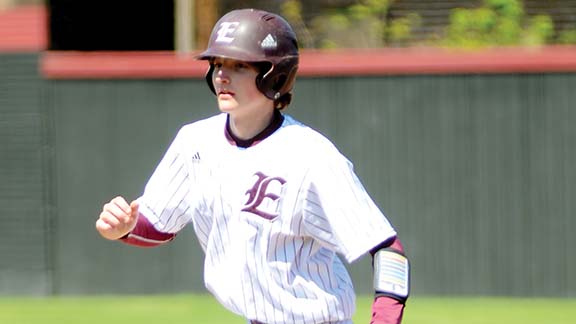 Photo by Dylan Rubino/Trevor Freeman of Enterprise pitched 0.2 innings of relief Tuesday against Bassfield, giving up two earned runs and striking out one as Enterprise took home the 17-2 victory.

In a battle of the Yellow Jackets, it was those from Enterprise who got the victory, as they scored 12 runs in the first inning to ease to a 17-2 win Tuesday night.

Six players for Enterprise recorded a hit and 10 players drove in at least one run to add to the scoring attack for the Yellow Jackets.

Junior Cade Feltus and freshman Dustin Prather led the way for Enterprise with two RBIs each and one hit each. Feltus led the team with three runs scored in the game.

Sophomore Landon Gartman got the start on the mound for Enterprise, tossing two innings, giving up no runs on no hits and striking out four in the process. It was a great two-inning performance for Gartman who has proved to be the ace of the Yellow Jacket staff.

With the lead securely in hand, senior Trevor Freeman came into the game for Gartman and pitched 0.1 innings, giving up two earned runs on one hit, one walk and struck out one. Eighth grader Dylan Carter came in to finish the game by tossing 0.2 innings, giving up no runs on no hits and striking out one batter.

Senior Tracey Easterling drove in the two runs for Bassfield.