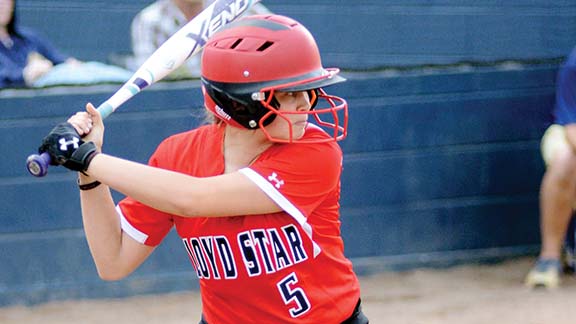 Carly Beth Wallace of Loyd Star (5) steps into her swing as she hits a two-RBI double to center field to help give Loyd Star the 2-0 win over Bogue Chitto Friday night. (Photo by Dylan Rubino)

It was another great pitching performance for Loyd Star senior Makenzie Smith as her shutout helped the Lady Hornets secure the 2-0 victory over Bogue Chitto Friday night.

The win keeps the Loyd Star Lady Hornets undefeated at 13-0 and the loss drops the Bogue Chitto Lady Cats to 7-6 on the season.

“Bogue Chitto is well coached and we knew it was going to be a tough game,” Loyd Star head coach Jan Delaughter said. “Makenzie pitched very well tonight. We laid down some great bunts and we came through and got some big hits in the game.”

Smith had ice wrapped around her right shoulder and elbow after the game and she needed it after another great pitching performance. Smith went the distance, throwing seven innings and giving up three hits, three walks and striking out nine batters in the process.

“She’s really been battling through for us lately,” Delaughter said of Smith. “She was great tonight and she’s been really good for us all season long.”

Not only has the pitching from Smith been great, but timely hitting has kept Loyd Star undefeated as well over the course of the season.

With the score tied at zero in the top of the fourth inning, Smith would reach base on an error and Johnna Norman followed up with a single to get runners on first and second with one out. Shelby Smith grounded into a fielder’s choice to advance the runners to second and third.

Carly Beth Wallace stepped up to the plate and brought both runners home with an RBI double to deep center field to give Loyd Star the 2-0 lead.

The Bogue Chitto Lady Cats would threaten in the bottom of the fourth with runners on first and second with one out. However, Smith would come up big and strike out the last two batters to end the scoring threat.

Bogue Chitto would make a late attempt to tie the game in the bottom of the sixth inning with a runner on third and one out, but couldn’t bring the runner home.

The clutch hit by Wallace was all they needed as the pitching kept the Lady Hornets afloat and won it 2-0.

“I told them in the huddle before the inning started that not everybody is going to get a hit so someone has to come through and get one for us,” Delaughter said. “That’s exactly what Carly did and she came through for us.”

Leggett, senior Terrah Nelson and sophomore Baileigh Jackson each had a hit to lead the Lady Cats on the night.

Wallace had two RBIs to lead the Lady Hornets on the night. Norman collected two hits and Shelby Smith and Malori Cade each had one hit.

The Wolves move to 8-11 on the year and 3-1 in MACJC play after Co-Lin split a double header with... read more