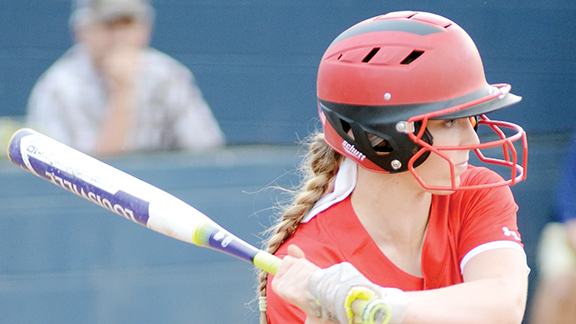 Johnna Newman of Loyd Star (20) steps into her swing in their win last week over Bogue Chitto. In their win Tuesday night against Enterprise, Newman went 1-for-2 at the plate with an RBI on the night. (Photo by Dylan Rubino)

Enterprise hosted district rivalry Loyd Star Tuesday night in a defensive game that saw the Lady Hornets come out on top by a score of 3-1.

Johnna Norman hit a bunt single to bring in the first run of the night for Loyd Star, scoring Smith from second to make it 1-0 Loyd Star. In the top of the fourth inning, Shelby Smith led off with a single, then Mal Cade nailed an RBI double to score Smith and made it 2-0 in favor of the Lady Hornets.

In the bottom of the sixth, the Lady Jackets threatened to rally as both Kalyn Chemin and Kaylie Burgess hit singles with one out. The Lady Hornets would get out of the inning without allowing a run to come across thanks to clutch pitching from senior Makenzie Smith.

An error by Enterprise in the top of the seventh inning would score a runner for Loyd Star to give them the 3-0 lead heading to the final half-inning.

In the bottom of the seventh, the Lady Jackets scored their only run of the game with Abby Grace Richardson leading off with a double off a dropped ball in shallow center. Jana Nations followed with an RBI single to bring in Richardson to make it 3-1, but the lady Hornets pulled away in the end with the 3-1 win.

“The girls kept working to the end,” Enterprise head coach Charissa Burke said. “We need to learn to put runs on early and cut down on errors.”

Smith pitched another great game for Loyd Star, pitching all seven innings and giving up no earned runs on three hits, no walks and striking out eight. Abigail Thornton led the Lady Hornets at the plate, going 2-for-4 at the plate on the night. Malori Cade and Johnna Norman each had one RBI for the game.

The Lady Hornets will head to Mize for non-conference play Thursday. First pitch is set for 6 p.m.

The Lady Jackets will head to Bassfield Thursday for a double-header. First pitch is set for 6 p.m.

Copiah-Lincoln’s Community College’s men’s tennis team hung on to win a hard fought match with the Hinds Eagles over the... read more