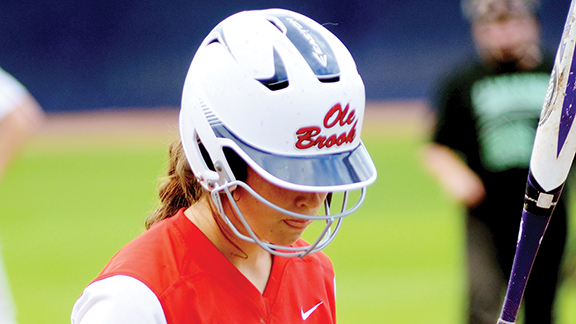 Mach Ziskin of Ole Brook steps to the plate in a game earlier this season. Ziskin went 3-for-3 at the plate with seven RBIs in their win over Franklin County Tuesday. (Photo by Dylan Rubino)

After trailing 5-0 after the first inning, the Brookhaven Lady Panthers scored 15 runs in the final four innings of the game to beat Franklin County 15-5 in six innings Tuesday night.

The win moves the Lady Panthers to 11-4 on the season and extends their winning streak to three games.

Three RBI singles and a bases loaded walk allowed Franklin County to take the commanding 5-0 lead after the first inning. Junior captain Jadeyn Fuller got the start for the Lady Panthers and fought off the rust of the first inning and kept her team in the game the rest of the way. Fuller pitched 4.1 innings and gave up four earned runs on five hits, four walks and two strikeouts for the game.

Junior Madison Thompson came in the game in relief for Fuller and picked up the win for Ole Brook. Thompson pitched the last 1.2 innings, giving up no earned runs on no hits and struck out one.

The Lady Panthers got on the board in the bottom of the third with an three-RBI triple from senior Macy Ziskin and an RBI groundout from junior Rileigh Allen to cut the deficit to 5-4.

Ole Brook pounced in the bottom of the fourth by putting up seven runs on the board and took control the rest of the way. The Lady Panthers added on two runs in the fifth and sixth innings to give Brookhaven the 15-5 win.

It was a big day at the plate, as the senior finished going 3-for-3 with seven RBIs, leading the Lady Panthers to victory. Sophomore Kat Wallace and senior Jada Henderson each drove in two runs for Ole Brook. Thompson and Allen each drove in one run as well.

Next up for the lady Panthers is a road game at Terry Thursday. First pitch is set for 6:15 p.m.