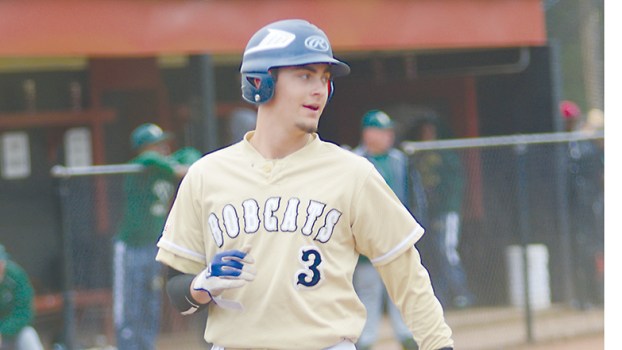 Photo by Dave Linton/Tucker Lambert of Bogue Chitto crosses home plate in a game played recently. Lambert came up big in their win Saturday with a three-RBI double.

Trailing 5-2 heading into the top of the fifth, Cade Cangemi hit a two-run homer, bringing Enterprise within one at 5-4. With the bases loaded with one out in the bottom of the fifth for Bogue Chitto, Trey Nettles hit an RBI single to increase their lead to 6-4. Bogue Chitto scored again as a run came across home plate when Trey Crittenden was hit by a pitch.

Tucker Lambert followed with a bases clearing three-run RBI double to make it 10-4. Tanner Gunther followed with an RBI single to give Bogue Chitto the 11-4 lead.

In the top of the sixth, Enterprise scored their final two runs of the game on a two-run home run by Tanner Waldrop as the Bobcats took the victory 11-6.

Luke Burns took the loss on the mound for Enterprise, pitching 3.1 innings and giving up eight hits, five earned runs and striking out one. Dylan Carter pitched in relief and gave up two hits.

Butler went 1-for-1 for Enterprise with the solo home run in the top of the third. Waldrop went 2-for-3 at the plate with a home run and two RBIs. Austin Fugler and Landon Gartman each went 2-4 at the plate.

Bogue Chitto will host division opponent Salem today with the game starting at 7 p.m. Enterprise will also be in division play today as they head to West Lincoln. Game starts at 6:30 p.m.

The Wesson Lady Cobras added another win to their record against the Lady Bulldogs of Natchez Saturday afternoon in a... read more