A woman who has become an advocate for special needs children admitted she taped more than 600 hours of conversations involving Loyd Star Principal Robin Case and her staff and plans to turn those over to the FBI.

Posey used her three minutes to speak at the Lincoln County School Board meeting Monday, held at Enterprise Attendance Center, to address the people who care about special needs children.

“I want you to know that there’s hope,” she said. “The people that want to find fault in me because I’ve spoken what I know is fact, try to put your head right and try to get on the same page as the other parents are, for children. It’s all about the children. It’s not about who does what harm. If you do things wrong and you call children idiots, I’m going to call you out. But I will try to do it the best way I can. And I believe I’ve done that.”

Posey said charges have been filed against her with the FBI.

“To the person that filed charges against me with the federal government for the tapes, that I am totally responsible for, I want to thank them, whoever they are,” she said. “Because now, it’s out of Lincoln County and with the Federal Bureau of Investigation of what’s going on in this district. Not only will it help this district, it will help the state. So to that person, I thank you. You can’t beat me, because I have the armor. You cannot get through my armor.”

Posey said after the meeting that she and her attorney met with two FBI agents for three hours at the Lincoln County Sheriff’s Office.

Sheriff Steve Rushing could not be reached Monday night for comment.

Lincoln County Superintendent Mickey Myers said he cannot respond “to any questions at this time related to this pending investigation.”

Posey said she asked the FBI agents if she was going to be arrested, but was told they were on a “fact finding mission.”

“They were concerned with who taped it. They don’t believe I did it,” she told The Daily Leader. “They’re trying to put the blame on someone at the school.”

She said she decided to record conversations with Case and others so she’d have proof to back up her claims that the special needs programs at the schools, specifically Loyd Star, need to be investigated and improved. She said administrators don’t know what goes on at the schools because they’re not being told. “I’ve gone up and down the chain of command for three years,” she said.

She said that she’ll turn over the recordings to the FBI soon after she uploads a few more audio clips to the Facebook group she created, which she has now made a private, closed group.

“I believe now we’re going to be heard and I’m not going to be quiet until we are,” she said.

In the meeting, Posey made reference to a drawing she’d posted on her personal Facebook page which shows Lincoln County Superintendent Mickey Myers surrounded by dozens of evil stick figures, who are also surrounded by half as many good stick figures, represented by blue for good and red for evil.

“The other good people need to come forward and kick these old evil people out of the way. Remember, it’s all about the children, and that’s all,” she said. “The people that hurt the children, they got to go.”

The only other individual to speak during the public comment section of the meeting was Pam Case, who used her three minutes to voice her disapproval of the current administration. “If this administration does not change, my grandchildren will go to BA. I will come out of retirement after 31 years of nursing to send them to the (Brookhaven) Academy.  The family, the people, the teachers, the administration, if they don’t get together, we will go in the hole.”

She asked forgiveness to the people she’s spoken to angrily.

She addressed Enterprise Principal Terry Brister, who was in the cafeteria where the meeting was held, and Loyd Star Principal Robin Case, who was not present.

“I’m sorry that I had a dislike for you for many years. I hope you forgive me for what I’ve been doing. You’d do the same thing for your children. And Robin Case, too.”

• The board approved a request for the Dixie Diamonds, a 14 and under softball team, to use the softball field at Bogue Chitto for practice. Board attorney Jim Keith advised that the board should have a policy in place concerning use of school property by the public that includes proof of insurance with an application and a nominal fee.

• The board approved a recommendation from transportation director Stacy Adcock for use of a bus and bus driver to transport a student from Loyd Star Attendance Center to Allied each Wednesday and Thursday for career vocational training. The bus driver will be paid out of federal funds.

• The board approved a request by Kayenne Alves at Enterprise Attendance Center to start an after-school program called “Jackets, Generosity” which will be open to high school students who want to volunteer to help in the community. It will provide community service hours for Mississippi Scholars and scholarship hopefuls, Alves said.

• The board approved principal Robin Case’s request to add a track supplement at Loyd Star Attendance Center for long distance racing in the spring, specifically the 1600 and 3200 meters.

• The board approved a request from principal Jay Rayborn to add a robotics supplement at Bogue Chitto Attendance Center and for the district. Bogue Chitto’s robotics team recently placed third in the state competition.

The next meeting will be held on a Tuesday, April 18, at 5 p.m. at Loyd Star Attendance Center. 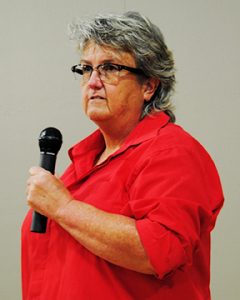 Deputy: I thought it was all over with; man gets 65 years in attempted murder