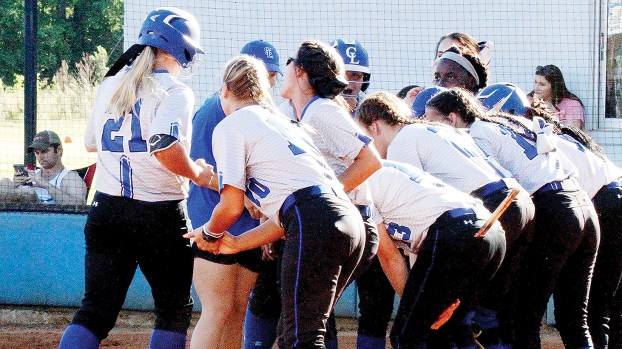 Sophomore Diana Hobgood of Co-Lin (21) meets her teammates at home plate after hitting a home run in game one of their double-header sweep of Hinds Wednesday afternoon. (Photo submitted)

“We had a really good day,” said Lady Wolves head coach Allen Kent. “Bailey and Christian threw exceptionally well. We played solid defense and got some big hits. Dianna had some really good at-bats and crushed it all day. It was a great team effort. I was really proud of our total team output and energy.”

Root scattered three hits, struck out three and walked two to pick up the win in five innings of work.

The Lady Wolves grabbed the early lead 2-0 in the bottom of the first inning. Kamryn Vanlandingham led off the game with a walk. With one out, first baseman Dianna Hobgood cranked a home run over the left field fence.

Jamie Martin led off the fourth inning with a solo home run to left field to push the Co-Lin lead to 3-0.

Starter Cecilia Akin took the loss for Hind allowing eight runs, striking out three and walking one in four innings of work. Also seeing action was Lizzy Lloyd who gave up two hits.

In game two, it was Black allowed just five hits and struck out four and walked two to earn the shutout win in five innings.

Co-Lin took a 1-0 lead in the bottom of the first on Martin’s RBI single to right field. The Lady Wolves added a run in the second in Kinley Westerfield’s RBI single to center field to push the lead to 2-0.

In the bottom of the third, Hobgood led off the inning with her second home run of the game over the right field fence and giving Co-Lin a 3-0 lead.

Again, it was in the bottom of the fifth where the Lady Wolves did their damage. Hobgood led off the inning with a walk. With one out, Thomas singled. Black smashed a triple to right field and scored on a throwing error to increase the Lady Wolves lead to 6-0. Anthony singled and stole second. Westerfield’s RBI line drive single to center plated Anthony. Vanlandingham’s two-run home run to left field gave the Lady Wolves the 9-0 win.

Lexie Guion led the Lady Eagles with a triple. Adding support with a single apiece were Patterson, Dearman, Kincaid and Kelly Ainsworth.

The Lady Wolves travel to Clarksdale on Saturday to take on the Coahoma Lady Tigers for a doubleheader beginning at 1p.m.