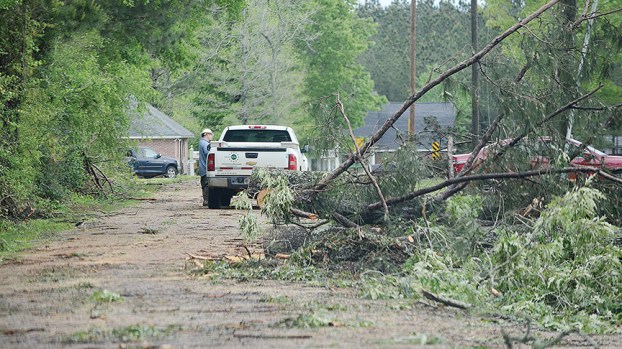 Photo by Luke Horton/Power crews worked throughout the day Monday to restore power in the Dunn-Ratcliff Road area.

She was startled awake at 1:13 a.m. Monday thinking a train was hitting her mobile home on Oakwood Lane near Loyd Star Attendance Center.

“I woke up and all of a sudden I heard this sound and it sounded light a freight train,” she said. “My trailer started shaking and I thought it was going to blow over.”

At daylight she saw a tree down about 500 feet from her home. “It was completely snapped,” she said. Her neighbor’s power pole was broken.

Aleman knows now it was an EF-1 tornado, which the National Weather Service said cut a wide a path more than 17 miles long. It started in Franklin County near the line and headed northeast through Lincoln County, skirting the northern area of Brookhaven.

“The only thing I got was a severe thunderstorm warning,” she said.

There was a severe thunderstorm warning issued for parts of Lincoln County at about 7 p.m. Sunday and again at about midnight for parts of Franklin and Lincoln counties.

Joanne Culin, a NWS meteorologist in Jackson, said people who would normally get alarms on their cell phones through the Wireless Emergency Alert system did not.

WEA is a public safety system that allows customers who own certain wireless phones and other enabled mobile devices to receive geographically-targeted, text-like messages alerting them of imminent threats to safety in their area.

The NWS only sends a WEA for weather events such as tornados, hurricanes and flash flooding. Because they didn’t issue a tornado warning, no alerts went out.

However, Culin said the severe thunderstorm warning that was in effect meant that there was a possibility of tornados.

“Tornadoes can occur in severe thunderstorms,” she said.

Culin said the EF-1 occurred within a line of storms. “It had some rotation but it was weak. It wasn’t anything that stood out,” she said.

The radar that sweeps Lincoln County is in Brandon.She said the tornado that hit Lincoln County went undetected. “Some tornados can occur below the radar beam,” she said. “Even if you didn’t have a tornado persay, straight-line winds can produce 80 to 90 mph winds.”

She said residents should take severe weather warnings just as serious as tornado warnings. “We always strive to have a tornado warning out, but strong winds can do just as much damage as a tornado as well.”

The EF-1 had maximum winds of 110 mph. A storm on March 30 brought with it straight-line winds of 80 to 90 mph, toppling trees and damaging homes. Two homes were destroyed and one 11-year-old girl was bruised when the ceiling collapsed on her while she slept in the top bunk of her bed.

No other injuries from either storm have been reported.

Aleman said she feels blessed that even though she didn’t get a tornado warning her mobile home withstood the tornado.

“With me being in a trailer like this, there’s nowhere real safe I could go,” she said. “I understand a severe thunderstorm warning is something serious, but I couldn’t believe we didn’t get a tornado warning. All I could do was just sit there and just pray. I’m 37 years old and I’ve never heard that sound before.”

Scott Williams’ home was not in the tornado’s path, but his mother’s was. Her mobile home on Gatson Trail received some damage and a few large oak trees fell.

Williams, who was fire chief at New Sight VFD for 11 years, said he’s frustrated with the National Weather Service for not alerting people that they could be in the path of a tornado.

He recalls several times when he was fire chief that warnings should have been issued when they weren’t. “I’d even call in direct and tell them ‘We’re looking at them,’” he said. “My frustration is, what about the people at home asleep and would have slept through it? By the time the wind gets there, it’s too late. With a tornado warning, they’ll give a warning for people in the path to be prepared.”

Brookhaven Public Works Director Keith Lewis said the weather sirens were not activated because the NWS did not issue a tornado warning.

Brookhaven’s five weather sirens were purchased in 2013, and outside of testing they are only intended to be sounded in the case of a tornado warning within the city limits.

Ivy Burt and Kimberly Cooper both feel blessed. The women have not met but when Cooper’s car crashed into Burt’s... read more