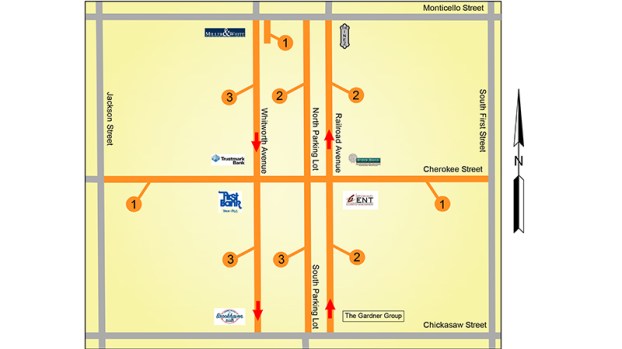 Road preparation work will start Monday for the paving project that will change the way motorists drive downtown.

Whitworth and Railroad avenues will be converted into one-way streets. Whitworth’s traffic will go south, while Railroad’s traffic will flow north. Traffic lights will no longer be active at their intersection with Cherokee Street. They’ll be replaced by 4-way stop signs, said Ryan Holmes of Dungan Engineering, which is in charge of the $492,000 project that the Brookhaven Board of Aldermen approved in August.

All parallel parking will also be changed to angled parking. This will create more space and an additional 36 parking spaces for the entire area.

Contractors will work through the night. “There will be some noise. Our hope is that the noise will be minimal,” Holmes said.

On Tuesday night, contractors plan to pave Cherokee Street and the Depot parking lot. It will be closed at 6 p.m. Tuesday and all day Wednesday.

Railroad Avenue from Chickasaw Street to Monticello Street and the north parking lot from State Bank to The Inez will be closed Wednesday at 6 p.m. and all day Thursday, April 13.

Whitworth Avenue from Chickasw street to Monticello Street and the south parking lot from the Gardner Group law office to Brookhaven ENT will be closed Thursday, April 13, at 6 p.m. and all day Friday, April 14.

Traffic patterns on Railroad and Whitworth will be changed to one-way when they reopen, he said.

“This is tentative,” Holmes said. “Things happen. This is construction.”

Part of the plan also includes restriping Sawmill Road, Williams Street and Martin Luther King Drive, though none of those will have the traffic flow changed.

Holmes said temporary striping will be completed at each location, then contractors will come back after two weeks and put in permanent stripes.

Motorists are asked not to park in the areas affected by the repaving project during the times that they’re set to be closed as it could delay work, Holmes said. Officials with the Brookhaven-Lincoln County Chamber of Commerce will be going door-to-door in those areas to inform residents and business owners about the closures, he said.

Electronic message boards will be installed in the area this week to alert motorists of the closures and upcoming changes, Holmes said.

The project began in late February with the city’s public works department replacing several manholes on the roads that will be repaved.

Heather Aleman’s trailer was shaking. She was startled awake at 1:13 a.m. Monday thinking a train was hitting her mobile... read more