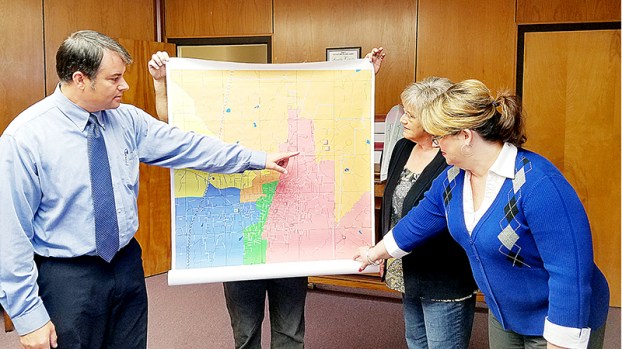 Photo by Donna Campbell/Lincoln County Circuit Clerk Dustin Bairfield shows members of the Board of Supervisors some of the options available for a new voting precinct in District 1, which is in yellow on the map. Pictured are, from left: Bairfield and Election Commissioners Marsha Britt Warren and Tiffany Furr.

Two precincts merge into one

Two voting precincts will be consolidated into one location before the next county-wide election.

The county leases the parking lot of the old Brignal store at 2240 Brignal Road. The building has been purchased and the new owners want to reopen a store there. The land won’t be available for the next election, so Lincoln County Circuit Clerk Dustin Bairfield was forced to come up with an alternate location.

There’s also a problem with the Rogers Circle precinct. Voters there cast their ballots in a portable building at Beulah Chapel Church at 1315 Brignal Road.

Bairfield met with the Lincoln County Board of Supervisors this week to discuss the options.

District 4 Supervisor Eddie Brown asked if they could send all the voters to Rogers Circle. Bairfield said he wasn’t sure that precinct could handle the extra load.

District 2 Supervisor Bobby Watts, whose district both precincts are in, suggested they consolidate them into one precinct which will be at the District 2 county barn, which is located at 1211 Old Hwy. 51 NE.

Rogers Circle and Old Brignal Store are both about seven minutes from the county barn.

Watts, who is president of the board, said the county barn has restrooms and a kitchen, which will be a benefit for the poll workers who must be there at least from 7 a.m. to 7 p.m. on election days.

“I think it’s a place for them and it will be good for Election Day,” he said.

“I think that would be very feasible,” he said.

The new precinct will be called Brignal/Rogers Circle.

The building that had been used for voting at the church needs many repairs, and will be donated to Beulah Chapel Church at the pastor’s request.

Pastor to be celebrated at Mt. Wade

The Rev. Randolph Hamilton tells his congregation to be friendly. It’s what God wants. “To gain a friend, show yourself... read more