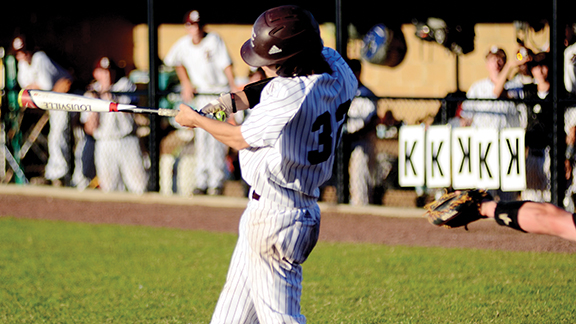 Freshman Austin Fugler of Enterprise (32) swings at a pitch in their 14-10 loss against West Lincoln Friday evening. Fugler had one RBI in their game one loss. (Photo by Dylan Rubino)

Lincoln County baseball rivals Enterprise and West Lincoln met up Friday evening in a critical district doubleheader with major implications in the standings on the line.

The first game was exciting from start to finish with both teams tied at nine heading into the seventh inning. West Lincoln scored five runs in the top of the seventh to take game one 14-10. Enterprise bounced back in game two, with a great pitching performance by sophomore Landon Gartman and the offense backed him up with 10 runs to take the second game 10-2.

In the first game of the evening, the Yellow Jackets jumped out to a 9-2 lead by the end of the third inning to take control of the game.

The West Lincoln Bears didn’t quit and found a way to shake off the rust and battle back. The Bears scored nine runs in the final two innings of the game to complete the comeback and defeated Enterprise 14-10.

The two teams combined for 11 errors on the field.

“I thought we started well and hit cruise control after that,” Enterprise head coach Cass Brister said. “Austin (Fugler) threw great for us and we didn’t make the plays to back him up. West Lincoln kept grinding and found a way to win.”

Freshman Austin Fugler got the start for the Yellow Jackets and pitched five innings and gave up three earned runs (five runs) on seven hits, two walks and struck out eight. Gartman, senior Cade Cangemi and eighth grader Dylan Carter pitched the final two innings of relief for Enterprise and gave up nine runs, none of which were earned runs.

Burris sealed the door for West Lincoln as the offense exploded late to earn the come from behind victory.

Sophomore Hunter Richardson led Enterprise at the plate going 2-for-5 with three RBIs. Fugler, Gartman and senior Marvin Butler all had one RBI each.

Enterprise bounced back in a big way in the second game with a 10-2 victory, led by stellar pitching from Gartman.

The sophomore pitched the complete seven innings and gave up two earned runs on two hits, four walks and struck out 12 batters.

“I was proud of the way my kids responded in the last game,” Brister said. “We hit the ball very well and Landon (Gartman) did a great on on the mound. This is a big win for us in district.”

Taking a 2-0 lead heading into the bottom of the fourth, Enterprise exploded in the inning and put up six runs on the board to put the game out of reach at 8-0.

The Yellow Jackets added two more runs in the bottom of the sixth after West Lincoln got on the board in the top of the sixth to take a 10-1 lead.

The Bears got another run across in the top of the seventh, but Enterprise held on for the crucial win.

Fugler had a big day at the plate in game two for Enterprise, going 3-for-4 with a team-high five RBIs. Carter, Gartman and junior Tanner Waldrop each had one RBI on the night.

Fielder and Burris each had one RBI to lead the West Lincoln offense in game two.

RAYMOND — The Copiah-Lincoln netters moved to 7-3 on the year Monday as the Wolves defeated Hinds 7-2 on the... read more