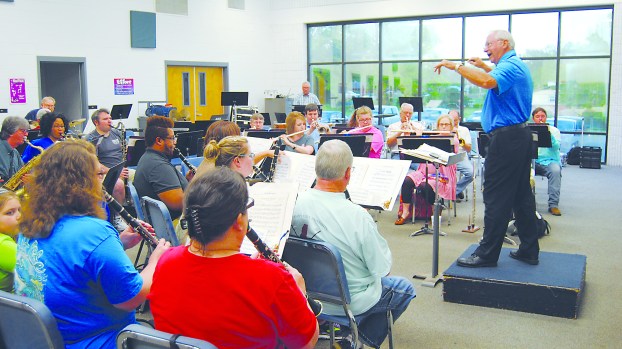 Photo by Brett Campbell/Retired band director Leroy Smith leads symphony members in one of the final practice sessions before the spring concert of the Ole Brook Wind Symphony, to be held Tuesday, 7 p.m., at Easthaven Baptist Church.

Symphony springs back into action

It’ll be a blast.

With about 35 musicians playing brass and woodwind instruments, along with a few percussionists, it’ll be a big one. Tuesday evening, the Ole Brook Wind Symphony will perform their spring concert at Easthaven Baptist Church, beginning at 7 p.m.

Led by directors Leroy Smith of McComb and Stanley Stewart of Wesson, the symphony has been around for 16 years, since the idea germinated and took root in the minds of Patsy Warren and Susan Jones. The group of volunteers grew to include musicians from Lincoln, Copiah, Lawrence and Pike counties, and surrounding areas.

Brookhaven engineer Steve Edge, a tuba player and a spokesperson for the group, said the symphony is always open to new musicians who love brass, woodwinds and percussion. In fact, the openness of the group is its mission. Anyone can join, with no audition, minimum years playing, monetary investment or age limit.

Edge said they should have their own instrument, and be able to play the music presented. But if anyone is interested and doesn’t own an instrument, others in the group can help find one.

This spring’s program includes performances from the concert band, clarinet choir and jazz band. Some of the selections to be shared are “They Led My Lord Away,” “La Virgen de la Macarena,” “The Entertainer” and “A Fifth of Beethoven.”

The group performs three times a year — once in the spring, once in the fall and a third show for Christmas was added in Dec. 2016. The shows are free and open to the public.

A Brookhaven mother is ecstatic that her 15-year-old daughter is coming home. Starletrial Fairman, who goes by the nickname Star,... read more