The men will be talking football and faith at the Fellowship of Christian Athletes “Banquet with Bowden.” The event, which begins at 6:30 p.m. at Easthaven Baptist Church, is a fundraiser for the Lincoln County chapter of FCA.

In 1965, Bowden moved to become assistant to coach Jim Carlen at West Virginia University, then replacing Carlen as head coach in 1969. With a 42-26 record under his belt, Bowden returned to Florida State in 1976 as head coach of the Seminoles.

He planned to stay only a brief time, helping the ’Noles climb out of a 4-29 three season funk. He stayed 34 years.

His only losing season at FSU was his first. He turned down head coaching offers from Auburn, LSU and Alabama – even the NFL’s Atlanta Falcons. From 1987 to 2000, the Seminoles had at least 10 wins each season and were always in the top five of the Associated Press College Football Poll. Bowden led the team to 12 Atlantic Coast Conference championships and two national championships — in 1993 and 1999.

When Bowden retired, he finished his career second in all-time wins by a Division I-FBS coach, with 377 wins.

Smith, one of Bowden’s star players, joined the Seminoles in 1986. He was named MVP of the All-American Bowl and the 1989 Sugar Bowl. Smith rushed for 2,539 career yards and 18 touchdowns and finished his FSU career as the school’s third all-time leading rusher.

In 1989, Smith was taken by the Miami Dolphins in the ninth pick of the first round in the NFL draft, and played four seasons in the NFL for the Dolphins and the Denver Broncos.

In 1996, Smith was convicted for possession and distribution of cocaine, and served seven years in prison. At his parole hearing, Bowden was the only one to speak on his behalf. In 2013, Smith was elected to the FSU Hall of Fame.

Smith now works with the Fellowship of Christian Athletes, and will introduce Bowden at the fundraiser.

The purpose of this event is to create awareness of ministry outreach and to raise funds to support programs and activities associated with the District 7 FCA, which includes Lincoln County as well as Copiah, Franklin, Lawrence, Wilkinson, Amite, Pike and Walthall counties.

Foster and Aker as well as David Culpepper, Rev. Randolph Hamilton, Clint Rounsaville, Tim Johnson, Chris Thurman and Jason Case serve as the Lincoln County FCA Leadership Board and are tasked with working with FCA Area Director Chris Huffman to expand the work of FCA in this area. 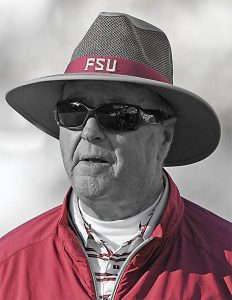