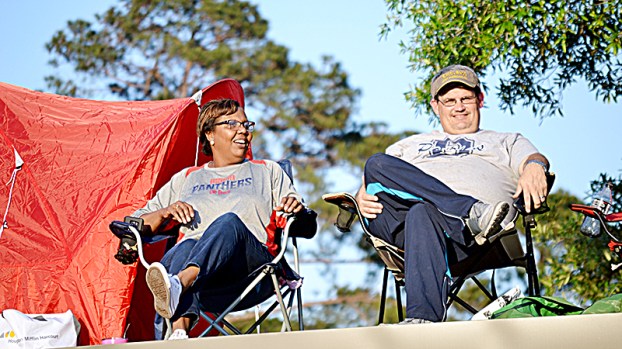 Photo by Donna Campbell/Lipsey School Principal Rita Robinson and Assistant Principal Eric Stokes told students they’d camp out on the school roof if they scored well on practice tests. They did and the pair kept their word. They pitched their tents at 5:30 p.m. today and will be there until Thursday morning to wave at the last group of buses to arrive on campus.

Lipsey principals camp out on the roof

Rita Robinson and Eric Stokes would do just about anything to see their students succeed.

Robinson, principal at Lipsey School, and Stokes, the assistant principal, spent Wednesday night on the roof of the school as a reward for their students’ improvement on practice tests for the state tests that they’ll take Tuesday.

“They are so excited that we are going to be on this roof tonight,” she said.

The duo pitched their tents on the rooftop about 5:30 p.m. and were there this morning to wave at students as they arrived for school.

“We’re going to be there until the last bus rolls,” Robinson said.

Wednesday evening found the two kicked back and relaxed in lawn chairs, enjoying the breeze and each other’s company about 15 feet or a ladder length above the ground. Stokes surfed the web on his cell phone while Robinson waved at cars cruising by on Drury Lane. One SUV pulled into the parking lot and someone tossed Robinson a chocolate Easter egg.

That will come in handy when she’s dragging this morning, giving tours of the middle school to bright-eyed fourth graders.

Robinson challenged the entire school — 476 fifth and sixth graders — to meet or exceed a goal of 75 percent improvement over previous scores on the Mississippi Assessment Program tests.

They’ve been taking benchmark screeners, which Robinson explained are  predictors for the MAP tests. This is the third one this school year, she said. They took it in the fall to get a baseline, and again in January. They recently completed their third practice run so that they’d be ready for the state test.

“We really wanted to see where our kids were prior to taking the test,” Robinson said.

According to the Mississippi Department of Education’s website, MAP is designed to measure student achievement on the Mississippi College-and Career-Readiness Standards for English language arts and mathematics and to provide valid and reliable results to guide instruction through data-driven instruction.

The MAP will assess students in third through eighth grades in English language arts and mathematics, Algebra I and English II.

Robinson told the students she and Stokes would sleep on the roof if they improved their practice scores. “I had to find something that would get them excited,” she said.

She stressed that they needed to slow down and think about their answers to the tests, which they take on school computers. “It’s about getting them to not click, click, click,” she said. “The standards that we have now are a little tougher. We’re requiring them to do a little bit more, more than just recall. They really have embraced that and they’re really working hard. We’re seeing phenomenal growth.”

The potential for the reward has worked.

Robinson made the announcement Friday in assembly that the students earned their reward. The cheering was thunderous. “We thought they were going to tear the roof down,” she said.

It’s good they didn’t, or the principals wouldn’t have had a place to sleep.

Robinson and Stokes are in their first year at Lipsey. Both were assistant principals at Mamie Martin Elementary previously.

They both came to Lipsey, which has had a state grade of D, with the intention of improving the school. The students are on board with that. “My kids are looking to make history,” she said. “They want to bring it up to a C or better.”