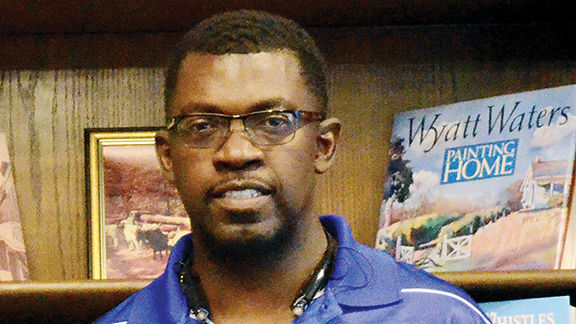 Going 43-11 over the past two seasons, Brookhaven High School head basketball coach Jimmie Butler has been named The Daily Leader coach of the year. (Photo by Dylan Rubino)

Plenty of coaching changes had to be made and the development of the younger players was key to the Panthers’ success during this past season.

Led by senior leaders Damarius Brooks, Denarius Gray and Jashawn Perkins, the Panthers won their district and reached the 5A state quarterfinals, where they suffered a disappointing loss to Clarksdale in Jackson.

For his coaching efforts and his team’s success, Jimmie Butler has been named The Daily Leader Coach of the Year.

“This team will always be my favorite,” Butler said. “After losing those six seniors the previous year, we were not predicted to be a state championship contender. This team represents every aspect of teamwork, which allowed us to become overachievers throughout the season.”

Developing chemistry of the team was the main goal for Butler entering the 2016-17 season. Butler put the team through summer workouts and games in order to build the companionship the team needed to succeed.

Butler saw improvement from his team over the summer and overcame a lot of obstacles to get his team to how far they went.

“We installed our offense during the summer and lost several close games due to team chemistry,” Butler said. “Late in June, the chemistry improved and we began to win ballgames. We ended the summer winning and wanted more.”

The drive began as soon as summer workouts ended and the team took off from there. The results of the hard work led the Panther to a 21-6 overall record, with all six of their losses coming by 10 points or less. The team was competitive in every game they played and scored at will.

The best moment of the season came in the district championship game at Provine High School in Jackson. The Panthers lost both of their regular season meetings against Provine and got the opportunity for revenge for the district title. The Panthers came out on top in a thriller 82-81 and used that momentum heading into the state playoffs.

“Winning the championship on their home court was special,” Butler said. “I think if you asked the players that question, they will respond with the same answer.”

That momentum carried to the 5A state playoffs, but the season ended in a disappointing loss to Clarksdale 60-52 at Jackson State University.

Butler felt confident in his team’s preparation for the game, but it simply came down to making shots.

“After the game, we were able to look at the stat sheet and realized that we just didn’t shoot the ball well,” Butler said. “We were disappointed, but understood that it was a blessing to have made it that far.”

In the last two seasons as head coach, Butler led the Panthers to a 43-11 overall record and made two runs in the 5A state playoffs with one district championship.

The foundation is set for the Brookhaven program and big things are to come in the future.

“We have made a strong statement about this Panther program,” Butler said.

As a senior leader and a relentless scorer, Brookhaven senior guard Damarius Brooks led the Panthers to new heights during... read more