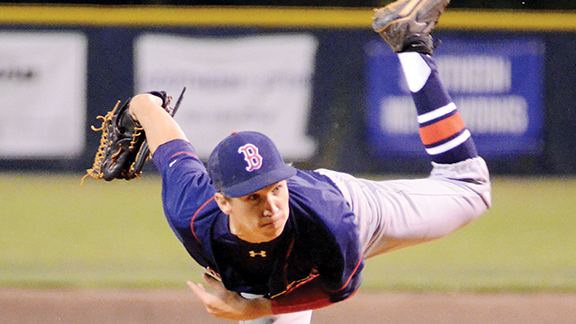 Senior Dalton Fortado of Brookhaven lets go of the his pitch in a game played recently. Fortado pitched 3.1 innings of relief Thursday night against Natchez. (Photo by Dylan Rubino)

The Brookhaven Panthers pounced on Natchez early by scoring 11 runs in the first three innings to cruise ahead and win the district matchup 15-5.

The win moves the Panthers to 19-7 overall and keeps them perfect in district play at 9-0.

Natchez tried to fight their way back into the game with two runs in the bottom of the fifth, but the Brookhaven bats were too hot.

Sophomore Corbin Falvey led the Panthers at the plate by going 2-for-5 with a team-high four RBIs on the night. Freshman Gatson Walker got his opportunity and made the most of it, going 1-for-2 at the plate with a two-RBI double on the night. Owens, junior Clint Stephens, senior Penn Wilson and sophomore Jacob Porter all had one RBI each to round out the scoring for the Panthers.

The last game of the regular season for Brookhaven comes Tuesday night when they hit the road to face Columbia. First pitch is set for 6:35 p.m.

The Loyd Star Hornets had a busy couple of days as they faced Lincoln County rival West Lincoln in a... read more